I was surprised.  Though I shouldn’t be.  Nothing in my life, including cancer, has delivered more surprises (and  fodder for writing) than my daughter Alli.

Happily she’s delivered far more than that.  Love.  Joy.  Pride.   The rich treasures and rewards of being a parent.

Still the surprises keep coming, since the day I became a mother.

At two and a half, she taught herself how to read;  I  have no idea how.

After high school, she rejected attending UCLA in favor of working at UPS.

She also rejected money set aside for her education when she finally did go to college; and she’s been entirely self- supporting since age 18.

She knows what’s under the hood of a car.

She doesn’t obsess over chocolate.

All surprises, all the polar opposite of me, just like the latest example: She didn’t approach her 30th birthday anything  like I would have.

No big party (I think the last one was her Bat Mitzvah).

No big trip (she hates to fly)

No pampering (she doesn’t know the meaning of that word, either)

To celebrate her 30th birthday (we define that word differently, too)  it’s totally in character that she would choose something involving discipline, organization and hard work:   on Sunday February 2, the exact day of her 30th birthday, Alli is running her first marathon.

No, wait.  Let me rephrase that.  She’s planning to run her first marathon.

Though we’re different in some ways, she’s got my DNA, so she skews toward the neurotic.   And saying she’s running the marathon would jinx it.

So she never says,  “When I run the marathon.  ” Her standard line is,  “If I make it and don’t  end up in the emergency room.”

I think I can safely say she’s planning to run it.   I can also say that when Alli says she will do something, you can plan on it happening.

Like her training.  She’s never been an athlete; so almost a year ago  she asked for help from my husband V, who’s an experienced marathoner.   His coaching meant  giving her a plan and there’s nothing Alli loves more than a plan.

All these months, she’s been remarkably disciplined and determined.  That part is no surprise.  But she’s also been remarkably coachable, especially for a control freak.   She’s followed V’s instructions down to the letter: how far to run, when to run, what to eat.  He says she never missed one single practice run and on every single run she has completed the exact mileage he prescribed—despite colds, traveling out of town, shin splints, nausea, sprained ankles, knees and hips.

Naturally, she agonized over whether she could accomplish her “warm up” half marathon in Long Beach a few months ago. 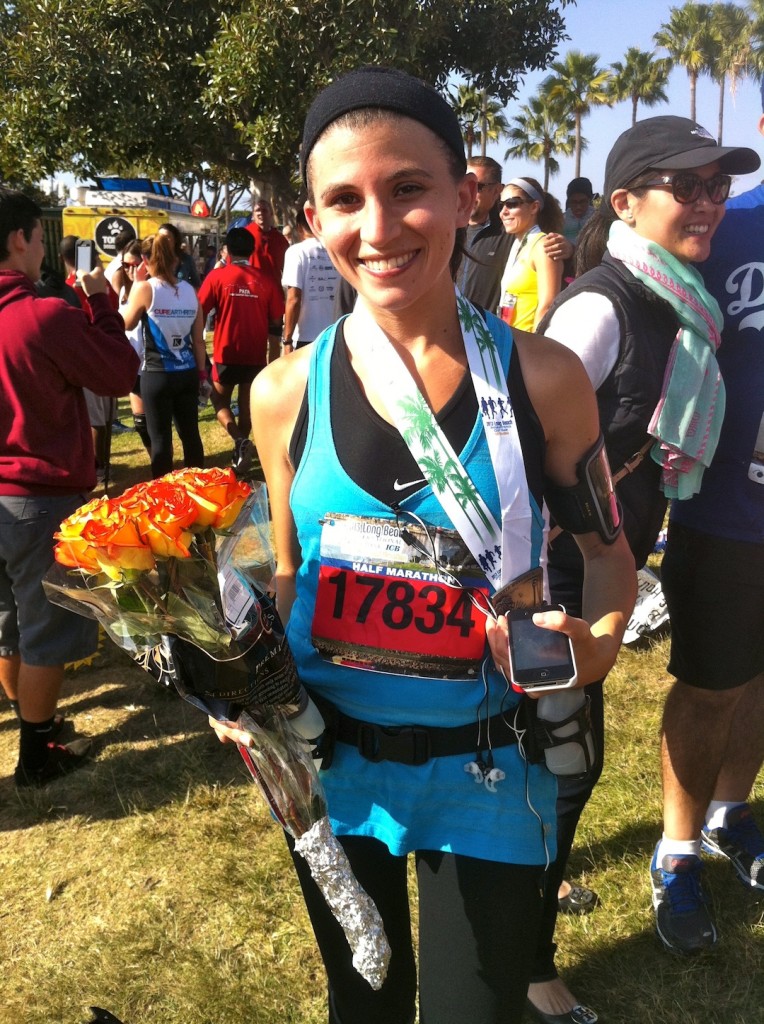 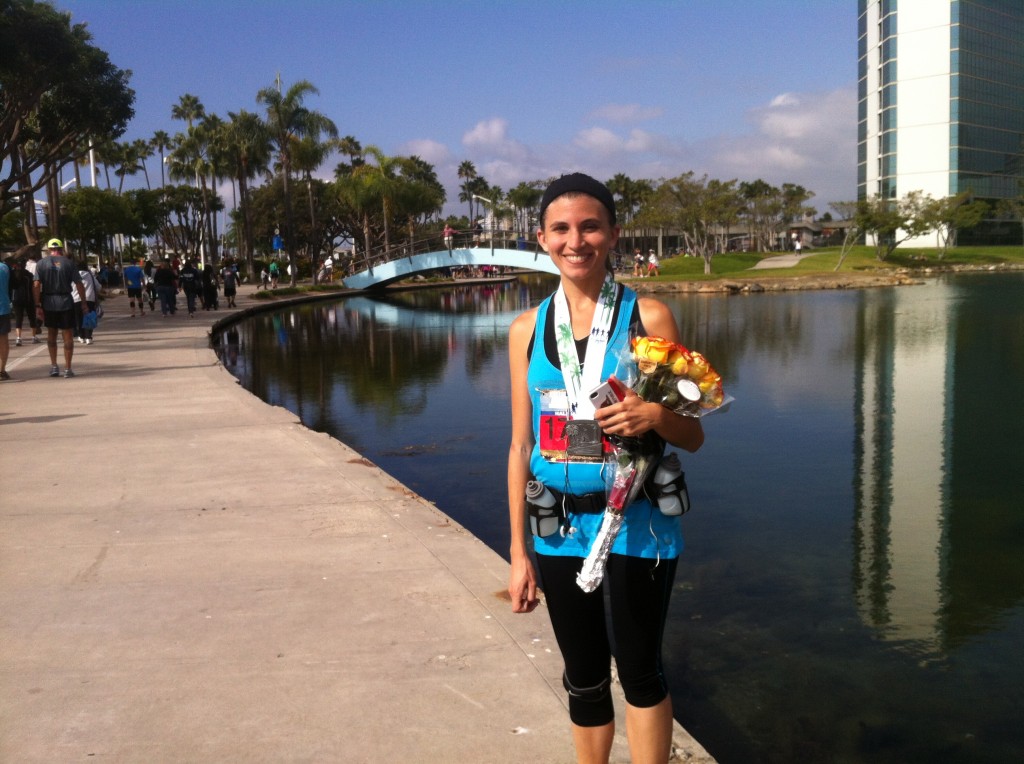 She was perky and energetic after running 13 miles. I was the one complaining  about having to walk a half mile uphill to the nearest Starbucks.  A few weeks later, she ran 20 miles at 4:30 a.m. and then cooked our entire Thanksgiving dinner.  When I say she takes my breath away, I mean it.

Running a marathon (I mean, planning to run) is a blip in the long list of why I’m so proud of Alli I could explode.

And for all the pride I feel about what Alli does I take far more pride in who she is, in the qualities of her character that make me feel incredibly lucky and blessed for the gift of being her mom.

Happy Birthday to my extraordinary daughter with all my love.   30 years and many more surprises to come.  I’m planning on it. 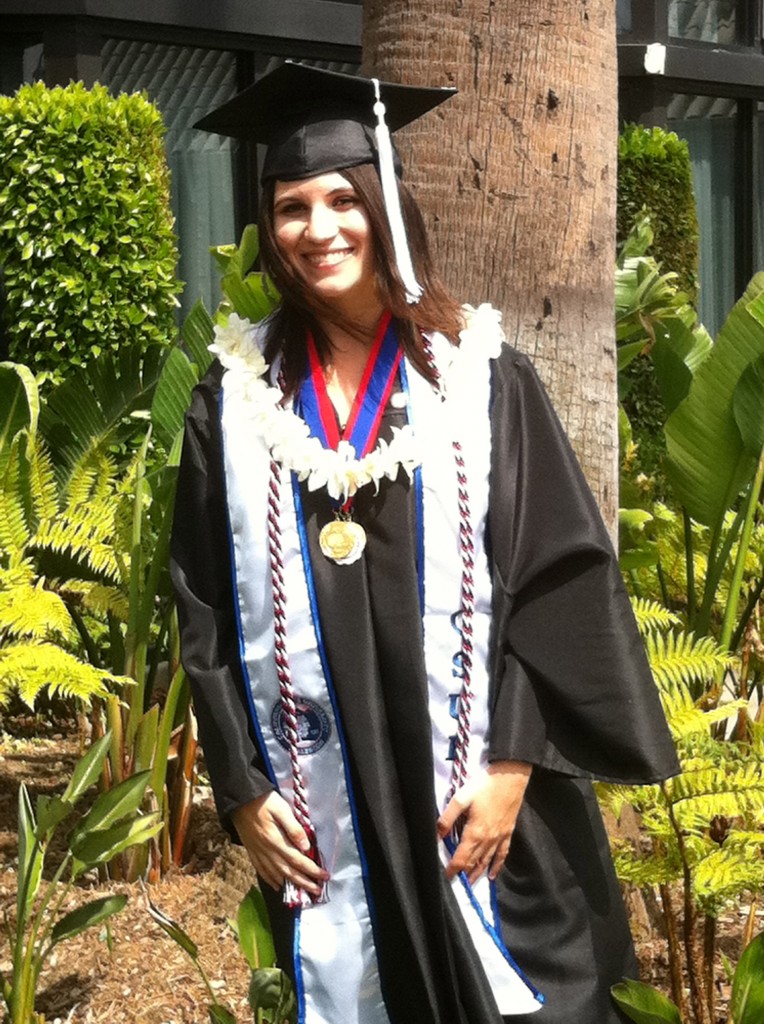 I wasn’t kidding when I said Alli supplies me with endless blog fodder.  Below are links to  a few of my favorites:

Fasten Your Seatbelt: Alli wrote this post; she’s a wonderful writer.  (NOT a surprise, right?)

Stand Back and Watch

A love letter to the graduate