You are here: Home / Anything & Everything / Goodbye again

This was 18 months ago, when Alli, V and I were at San Francisco airport waiting to meet her husband.   They had not seen each other for almost a year— they would have two weeks together, before he would return to Iraq to continue his 15- month deployment.

As we stood at the gate holding our signs,  we had no idea that other people were gathering behind us, as we waited for all the passengers to deplane.

He stepped through the gate in his uniform, and suddenly, all around us, people were applauding.  And crying.  And waiting quietly, to have a chance to thank him for his service. 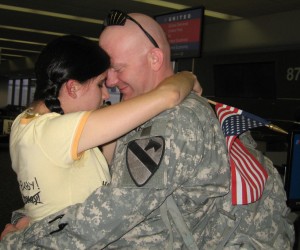 Not what you might expect in liberal, anti-war San Francisco.  It was a completely unexpected and emotional outpouring from strangers— on top of our own intense emotions that day.

And  an experience I will  have again.

After a year at home in El Paso, his unit is being re-deployed for another year in Iraq, as President Obama winds down the war begun by George W. Bush.

Right now I’m saying goodbye again…until the day I will stand in an airport with a sign to welcome him home.