You are here: Home / Chocolate & Other Food for Thought / Caring and Sharing

As I write this, my friend Dana is hauling herself up and down the hills of San Francisco  with thousands of other participants on the Avon Walk.   I’m sure I speak for other survivors, to say how grateful we feel to know that someone has your name on their shirt and your face in their heart; that someone would make so much effort to honor you, and benefit the lives of so many others.

I was supposed to be walking alongside Dana.  And though I couldn’t join her doing something worthwhile in the fresh air, at least I’m outdoors too.  Well, sort of–-the restaurant does have an outside patio.  Where instead of walking, I’m eating dinner–along with V, my son Daniel, and another family I’ll call the Bensons. 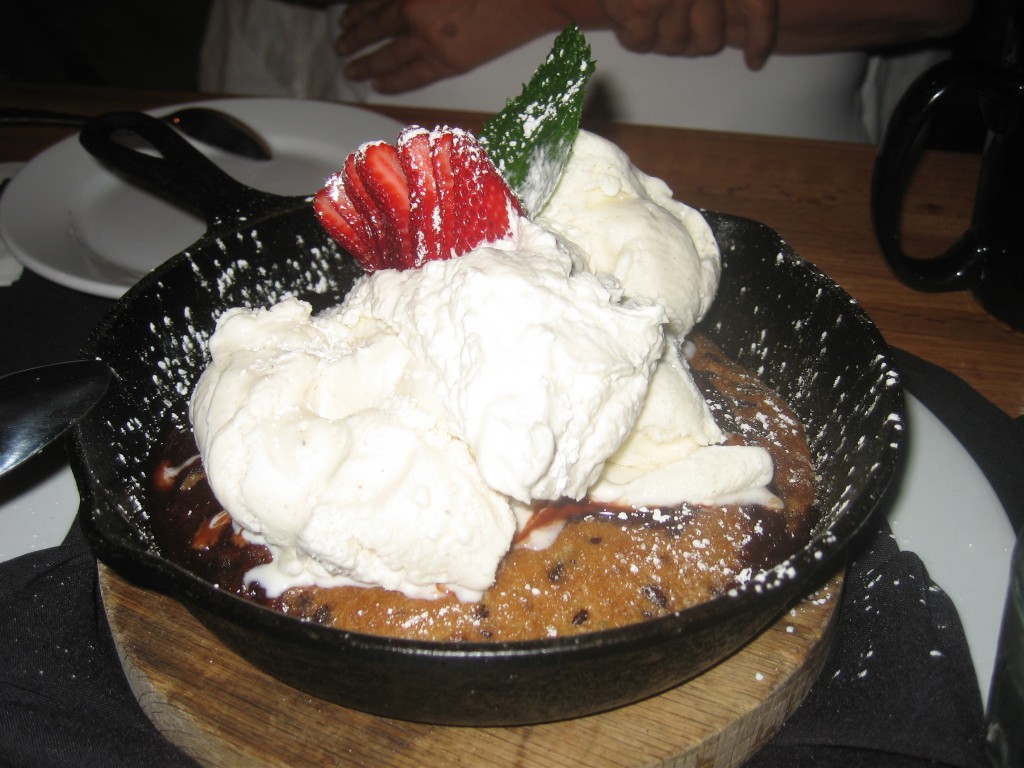 At this restaurant , the signature (and incredibly decadent) dessert is called the Chocolate Chip Cookie Dream.   And what else could you name a freshly baked chocolate chip cookie the size of your face, brought to the table fresh out of the oven in the skillet it was baked in, topped with ice cream and whipped cream. (Fortunately it’s not one of those restaurants where the menu lists calories.)

I’m proud  to see Daniel prove how responsible he is….because on his own, he remembered that you have to order this dessert at least 20 minutes ahead of time. He stopped our waitress and ordered the cookie in advance– without even being prompted.

There’s an elegant etiquette involved in sharing a dessert with a group–not often followed in the privacy of the family home.

The dessert is set on the table with a flourish.  Each person waits politely for someone to take the first bite.  That person gently dips a fork into the dessert, savoring it, as the other diners gradually take up their forks, and the ballet begins—the graceful ebb and flow, forks forward and back, almost in rhythmn, as peaceful as a summer breeze, floating around the table, everyone joining in a delicate and almost musical balance of timing, motion, and flow.

This culinary tableau presents an opportunity to describe my son.   Daniel inherited a multitude of personal qualities from me,   3 of them on display tonight.

#1–A deep and powerful attraction to chocolate and anything sweet

#2—an ability to eat faster than anyone else

Our waitress approaches with our freshly baked dessert, its aroma wafting over the other diners surrounding us.  She places the dessert in the center of our table, still piping hot and steaming in its skillet–and she distributes forks to all 7 of us.  I’m seated strategically in the center of the table, directly in front of the skillet.  Daniel has the least advantageous position at the far end of the table, but the advantage of being over six feet tall with a long reach.

There’s no fanfare to start, but I’m fairly certain that the first person to pierce the cookie is me, followed closely by Daniel.  The rest is a blur.

I remember very briefly pausing to mentally salute Dana, walking 13 miles in my name.  But Dana is in San Francisco and on the table in front of me, the ice cream is melting.

The Bensons politely stretch their forks toward the cookie, ready to join the mix as soon as someone moves a fork out of the way.  One of us would have to pause momentarily to allow the Bensons into the inner circle.  But we don’t stop although we adore the Bensons.

V has his strategy down from years of breaking bread with Daniel and me.  He shoves his fork in quickly, loading it with as much of the cookie, ice cream and whipped cream as it can possibly hold.  After this one heroic effort, he backs off.  He knows to stay out of the way as Daniel and I polish off the entire contents of the skillet.  The Bensons never had a chance.