Maybe you missed it.  I did too.  I had no idea there was another holiday in April.  That April 3 was National Cleavage Day.  And not an April Fool’s joke.

I’d like to know why there was no celebration of cleavage when I had some to celebrate.

I hope this doesn’t sound like sour grapes  (even a grape would be more of a breast than I have).   I’m not sour about losing my breasts to cancer.   I’m happy—because even though they’re not here, I am.

I was never into attracting attention with my cleavage, anyway.  Even when I had some to show off.   Because I felt cursed by my cleavage.

I mean, having breasts is cool but not when you’re 9.   So I  wasn’t cool.  And I definitely wasn’t hot.  I was humiliated.

Wearing a bra in 4th grade was not a status symbol.  It was serious. Even the name was serious.  When you say it out loud,  you can hear it.   There is a very definite “seer”  in “brassiere”.   Which is maybe why I took  breasts so seriously–because everyone around me did.

My mother was serious when she finally dragged me to the department store to be fitted for my first bra.  (34B —already a serious size).   The bras were serious too– not the little lacy flimsy things I took my own daughter to buy at Victoria’s Secret.  My first bras were the lingerie equivalent of orthopedic shoes—-stiff, white, cotton things fastened at the back with a row of hooks designed to fluster and frustrate teenage boys.

Most serious of all was the lady who joined my mother and me in the dressing room for this feminine rite of passage.   She looked less like a saleslady and more like a prison matron, who inspected me up and down and measured my chest, and stood over me for the moment of truth.  It had to fit perfectly.  No daylight would pass between my breasts and the material that covered them.

Remember in the movie “Legally Blonde“– the little movement Elle calls the “Bend and Snap”?   Well, the bra lady had her own version.    You bent over and flopped your breast around inside the cup until it snapped right into place.   I took this so seriously—that just in case she was still watching me from somewhere,  I continued to do this motion every single time I bought a new bra for the rest of my life—until I had no more breasts to snap. 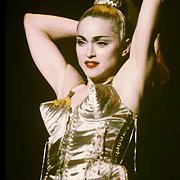 As for the bra itself…the bra Nazi chose that, too.  It was serious stuff…a bra that came to a point and was shaped like no woman’s breast I’ve ever seen.  Years later when I saw Madonna wearing those cone-bras, I was pretty sure she was wearing some of mine.

Meanwhile my own cleavage remained an issue and no one was more serious about it  than my father.   Don’t worry— it was nothing weird.  It was just serious.

Because  my mother had died by the time I was in college.  Which meant my father was in charge of my health and welfare.  And much to his chagrin, my breasts were positioned at the exact intersection of two tumultuous social changes—-feminism and sexual freedom thanks to the birth control pill.   Which means that while my breasts were as large as they would ever get (when I was not pregnant or nursing),  I was no longer wearing a serious bra that would hold them up.   I  had stopped wearing a bra at all.

My dad, who was over his head but completely well meaning, was really WORRIED about this.   He worried that because I wasn’t wearing a bra when I was 20, someday when I was older….my breasts would SAG.

And he was absolutely RIGHT.  My breasts WOULD sag.   If only I had any.

If only he could be here to laugh about that.

I laugh about it—-because I’ve learned not to take my breasts—or lack of them—so seriously anymore.    Because I’m big on humor, even though I’m not big on cleavage.

So next year I’ll be sure to celebrate National Cleavage Day….as only a person with no cleavage can.