You are here: Home / Parenting & Family / a round trip 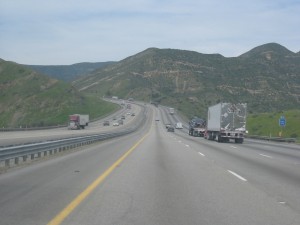 Driving from Monterey to Los Angeles and back—I’ve done this round trip countless times.  Yet it felt different somehow.

On the way home, my CD player breaks a few miles out of L.A.  In the middle of the state, there isn’t much on the radio that isn’t religious or Spanish—so I have almost 5 hours—alone with my thoughts.

The road is mostly straight but my mind keeps going around in circles.  As if everything  has come full circle.  Kids.  Relationships.  Life.  Even the trip itself.

It’s been 15 years since I moved the kids from Los Angeles to Carmel, and started regular runs to take them back down during vacations.  I loved taking a break, going alone to L.A. where the kids would be with their dad and I could spend time with friends I missed.

We were the 3 musketeers, the kids strapped into the car, a captive audence to sing along  to the Beatles, Bob Dylan, and Broadway show tunes.   In return they got to stop at their favorite places for diversion along Highway 101—the House of Bread in San Luis Obispo, In and Out Burger, and Santa’s Village.

We had one last tradition on the ride home.  Always the same scene, as familiar as a bedtime ritual.   Daniel would suddenly announce he had to pee right that minute.  He always did this at the same place,  in the middle of nowhere in the Salinas valley farmland.   I’d pull off the road at the same exit, and we’d stop for him to pee, always by the same tree.

I don’t go often to L.A. anymore;  but when I do, everything is different.    This time,   Daniel comes down with me but we drive by his tree without a glance.   There’s no need for diversion—so we don’t even take the same route.   We skip the House of Bread and Santa’s village on the 101 and take the 5, boring but faster.   Daniel plays whatever music is mutually acceptable on his ipod–which  doesn’t seem to include Broadway show tunes.

Of course the biggest change that’s come around  is that Alli and Daniel go to L.A. themselves.  If I go at all,  the drive is like it was on my way home.  I’m driving an empty car, back  to an empty nest.

Since Daniel left for college, he’s been urging me to get a dog.   I’m obsessed attached to Peppy, who was always his cat.  Now she’s apparently mine, yet  another thing that’s come full circle.

Even with Peppy, Daniel thinks I’d like having a dog,  a companion to take along on trips, like the one to LA.   So far I’ve  resisted.   On the long ride home, I think  he might have a point.

If I had a dog, I could stop and he could pee by Daniel’s tree.  Maybe I could even train him to bark to Broadway show tunes.

A half hour before I get home, I have to drive right past the local SPCA.  I don’t stop, but I do slow down, and think about it.