You are here: Home / Anything & Everything / the drive of shame

I’m not a car person.  This is, for me,  a rare understatement.   If they have safety features, and get me from point A to point B, I don’t care about cars at all.

V has bugged me for years to get rid of my car.   First it was a point of principle with me.  Now it’s become a point of no return—-as in, I would get absolutely no return on this car even if I wanted to sell it.

My car is 11 years old;  it has over 120 thousand miles; and  looks it.  (You’ll have to use your imagination: I’m pretty transparent on this blog, but even I draw the line someplace on humiliation.)

V has owned 3 cars since I’ve had mine.   It’s a bruised and battered mess both inside and out.  I like it because I don’t have to think about it;   I don’t worry that it’s filled with sand from the beach and chips from broken tiles and hauling my mosaic pieces around.   My kids make fun of it—inside where they find things like socks and old water bottles;  and outside where there’s a dent I never fixed after hitting a tree while parallel parking (don’t ask).   I don’t notice the dent.  I don’t even notice the car, other than getting it serviced or filled with gas.

I’m pretty sure  other people notice it.   But I’m happy in my oblivion, living in a state where people love their cars more than their children. 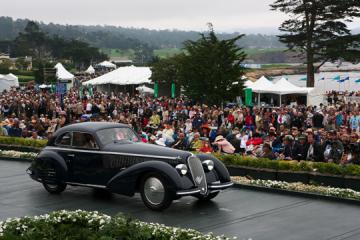 And now I live in a place where the biggest event of the year is a CAR show:  the most glamorous and glitzy car show you can imagine—the Pebble Beach Concours d’Elegance—held every August, billed as the “world’s premier celebration of the automobile.”   I so don’t get this.   To me the word “celebrate” does not belong in a sentence with the word “car”— but with the word “chocolate.” 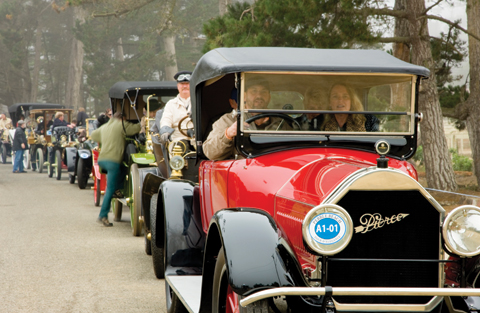 I’ve never attended.   Usually I leave town the weekend of the Concours because of all the traffic.   This year I was here, but I successfully avoided any contact.  Until the other night when I had dinner in Carmel with my girlfriends.

It wasn’t just the people stopping outside the window where we were sitting, ogling the car parked outside the restaurant   (which I didn’t recognize as a Ferrari till someone told me).  The problem came when we LEFT the restaurant and I went back to my own clunker parked nearby  (even the government probably wouldn’t give me cash for this one).

I was rushing to get to the movie.  I tried to weave my way through the crowded side streets, really annoyed at the congestion.  It seemed even worse than I imagined the worst of the Concours.  I found out why, when I reached the middle of town.

There were cones blocking off all the side streets, forcing me to drive down the main street.   I was shocked to discover— I had Ocean Avenue all to myself.

The street was completely empty.   Of cars.  But it was mobbed with people.  I had never seen so many people in Carmel; they were sitting on the curbs, standing several rows deep, all eyes pointed in the direction I was coming from, all  waiting patiently for the parade which was about to start.

People had come from all over the world…. to see this parade of world class cars…..which appeared to begin with me  cruising down the street, all alone, in my clunker.

They don’t call it a classic car show for nothing.  This  was a classic.