You are here: Home / Anything & Everything / the exit row 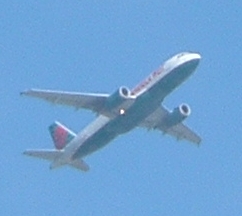 I’m on a plane writing this.   I used to love flying and then when I became a mother I suddenly became terrified to fly alone in case of a crash leaving my kids motherless.   So for the first 8 years  I had kids, I never got on a plane without them.

Once I got cancer all of that changed.    It was such a relief.  Knowing  I was going to die of cancer made it so much easier to get on a plane.  Suddenly I felt oddly bullet-proof.  Even all these years later,  fear of flying isn’t on my radar.

In fact, getting cancer helped me worry less in general— once my greatest fear actually happened, it made me much less fearful.  And much more fatalistic.

Over the years since, I’ve come to believe even more in fate and our inability to control it.  I‘ ve developed a somewhat comforting trust in the universe that I’m here till the time comes when I’m not.

I  gave V  a tiny bit some of the credit  since he was not Jewish and thus much more philosophical and relaxed.  How lucky was I to have a husband who could minimize my tendency to worry and obsess?

So get this.  The other day V says to me–“Do you know that people are statistically  most likely to die the month following their birthday?”

Did I really need to hear this fact the day after my birthday— with a full month to go?

Nor did I need to hear the other stuff he’s spouting since he read a book called The Survivor’s Club.  Suddenly he’s full of little useful tidbits of information.  Such as: the safest place to sit on an airplane is an aisle seat–within 5 rows of the exit row.  Plus—on a plane you should be wearing running shoes in order to run away immediately while a crash is still survivable.

My father did not have this information in the 1950’s—-yet he survived TWO plane crashes.  I have no idea if he was near an exit row– or what kind of shoes he had on.

I don’t want to know;  I prefer my fatalistic attitude and I don’t want to think about this stuff.  Besides,  I like sitting up front, and I  like the window seat.

Today V drops me off at the San Jose airport for my flight.  By now his survival tips are ancient history.   I’ve been so distracted over the last few days,  I don’t remember to print out my boarding pass, much less remember to wear the right shoes for a fast getaway.

The shoes are a lost cause;  and I silently curse V  as I choose a seat one row away from the exit row.  And then I throw my fate in with fate, abandoning my superstitious nature—in fact,  I  am actually ON THE PLANE (poo poo poo) writing this.    In my window seat.

P.S.  The plane lands safely.  Later V calls with one more statistic I wish I knew earlier:  you are more likely to be killed by your pet than in a plane crash.