You are here: Home / Nostalgia / The Legend of Leapin' Larry Greene

I don’t pay much attention to Facebook pages …..and this one almost slipped by me last week:   “In Honor of Larry Greene”

In the television news business, where reporters and anchors are household words whose job is to command attention—-the people behind the scenes usually are just that.   Below the radar.

But some don’t fit that mold.  Or any mold. 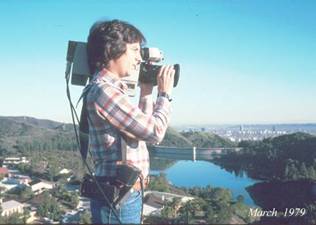 I was already working on the Public Affairs show Montage at the CBS station in Miami—–when I was hired to be the reporter for the late night news.

This was the 1970’s;  I would be the first woman to  infiltrate the tightly– knit late news crew-—and some of the guys weren’t too happy about it. (no names; you know who you are….LOL)

Being one of the first women to graduate from Yale—the idea of working in an all–male environment didn’t faze me a bit.    But before I started, something else bothered me about my upcoming job.

On the late shift in those days,  there was only one reporter and one photographer—which would require the two of us to be totally inter-dependent and totally inseparable.

Oh, great, I thought.   Just what I need  to make this job even more stressful— working 9 hours every day with a wild man.

Barely out of the University of Miami, barely legal age—he was already a legend.

I didn’t really know him; but I knew about him.

Where the Leapin’ came from, I’m not sure.  But it fit.

His body and his brain never seemed to stop moving.

Original, outgoing and outrageous, he had a constant twinkle in his eye and a trick up his sleeve—

There seemed to be nothing he couldn’t do—or wouldn’t do.

And there was no one who didn’t like him.

Always entertaining, always endearing,  he was a people magnet.   He wasn’t just the life of the party; he personified life itself.

Close relationships at work can be like marriages—you see each other at your best and your worst;  you know which strings to pull and which buttons to push.

And for a reporter, your camera–person is especially important— with the power to make you look  good—or look bad.

From day one,  I always knew Larry Greene had my back.

I couldn’t  have asked for a better partner— in every sense of the word.   We were lucky to be working in the golden age of television news.   Though even calling it “work” seems a little wrong—since I spent most days laughing with Larry.

For all his goofing around, he turned it off when he turned the camera on.  He was always professional.   He always cared.  He always got the story.

Those stories we covered at night covered the full range—-from mundane stuff to meetings to murders.    Plenty of times we found ourselves in a situation that felt too hot to handle.  At least for me it did.  Like one time an angry striker on a picket line pulled out a loaded gun and waved it in our faces.

The funny thing, considering I”m neurotic,  is that I never felt fear—-thinking back, I  felt safe.

Cool—but not  jaded—he could  be like a kid in a candy store when the job brought special perks.   Like the day we found out we were being sent to interview Mel Brooks.

I wasn’t a big fan, but Larry was.  He even knew Mel loved Raisinets;  so Larry went out and bought a box he could give Mel as a surprise.

Neither of us had a clue that a few months later I would marry Mel’s personal manager—who I met that day, and I would move to Los Angeles.

And that Larry would also move to Los Angeles soon after I did…..

And that we would end up working at the same station, CBS Channel 2 in Los Angeles ( where Larry would stay for 24 years.)

In Los Angeles our relationship was less professional,  more personal.  We didn’t work together regularly but  Larry would come over to visit me and my husband.    The few times I met his parents,  I tried to picture the future Larry at his father’s age.  The idea of Leapin’ Larry as a husband and father— was like Peter Pan growing up—almost too much for my brain to grasp.

But Larry fell in love— and I was at his wedding to Diana, his beautiful wife.  By the time they had their two sons, our lives had grown apart.  And when I moved out of Los Angeles, we lost touch over the years.

So I was stunned, like everyone else,  to learn that Larry was killed in a US Navy helicopter accident flying over the North Arabian Gulf near Iran, in September 2002, shooting a story for CBS.   The only part that made any sense is that he died doing what he loved.

I went to Los Angeles for his beautiful memorial service and tribute;  a thousand people showed up, including Ann Curry who came from New York—all of us who loved Larry and were touched by him in some way.  For all the times he made us laugh, this is when he made us cry.

And recently someone started that Facebook page to honor his memory.  Seeing it prompted me to write this, knowing how I feel when I hear about my own parents from someone who knew them.  Nothing can replace a parent, but we can honor their memories—-by sharing our memories.

Larry was unforgettable,  and there are some classic stories.    No question, he was larger than life—-not physically, but his personality, his energy, and most of all, his heart.

So it makes sense that he will always live in the hearts of those who remember all that he gave —so much to so many—-the love and the legend of Leapin’ Larry Greene.