You are here: Home / Anything & Everything / Two for Moneyball 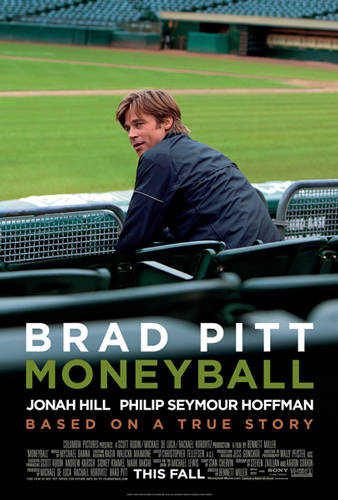 As V and I walk out of the theater after the movie, my phone rings.

It’s Judy; I tell her where we are.  “What a coincidence!  I just saw it, too.   Of course Dick would have wanted to rush out and see it Friday on opening day—but I decided today was better—it was the perfect way to spend our 44th anniversary.”

That makes sense—on one level.   Dick was a movie publicist and film aficianado; as a member of the Motion Picture Academy, he even got to vote for the Oscars.

But here’s the thing:  Dick died several months ago.

Yet he really was at Moneyball with Judy.  Inside a dufflebag on her lap.

“He would have loved it,” Judy says.  And she didn’t mean just the movie.

I agree.  He would have loved that they both got into the movie for the price of one ticket–a two-fer.

Even more he would have loved the idea that Judy feels less alone by having his ashes nearby.  That somehow they can  continue “sharing” life experiences—like joining the whole family out for dinner after his memorial service.  (Although technically Dick wasn’t “at ” the table ; he was under it,  his first outing in the dufflebag.)

Before this starts to sound like the premise for a new comedy, I want to say that Judy  is no lunatic.  Far from it.

I totally love her thinking; and I totally would do this.   I also think it’s possible Judy’s ahead of her time.  (not intended as a pun although somehow it sounds like one).

I have no stats but I suspect cremation is increasing, even among Jews who aren’t supposed to do it.

Judy certainly isn’t the  first person I know to find comfort having their loved ones’ ashes nearby . But she’s the first to uncover so much humor in it.

“Can you imagine”, she asked me, ” if the person next to me at the movie knew the contents of my bag?”

So you might want to look closer next time you go someplace.   Judy’s idea might just catch on.

At the very least, she promises Dick will be getting out again.  Says Judy,  “My next challenge is to qualify us for the carpool lane.”