You are here: Home / Parenting & Family / I am Forbidden

I was 45 years old;  divorced with two children, when I re-married a man who wasn’t Jewish.  My father refused to come to the wedding— and shut me out of his life.

Though we were not raised to be strictly observant Jews, he had been raised Orthodox; I knew that Orthodox Jews don’t accept inter–marriage; they even mourn for someone like me who marries out of the religion.  Still I never thought it could happen to me.

I never signed up for this….that’s for sure.

He was my only parent since my mother died at 41.   I admired and adored him; this experience ripped a hole in my heart.  At the time  I didn’t realize how deep the hurt was;  but I don’t think it was a coincidence that I was diagnosed with  cancer a year after the marriage.

Ultimately  cancer was the catalyst that allowed us to reconcile; he even came to stay with us in California; and met my new husband.  Though things were better, they were never the same;   I didn’t realize he was already in the beginning stages of Alzheimer’s; and would die of it a few years later.

We never discussed my marriage and what had happened. 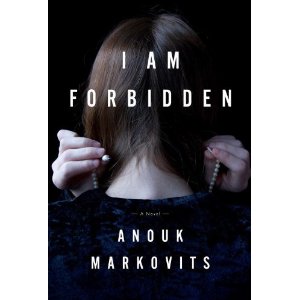 I received the latest novel for my online book club, not knowing the details in advance; as I got deeper into the story, I couldn’t help seeing the parallels to my own life.

I am Forbidden by Anouk Markovits is about two women,  raised as sisters within the Satmar sect of Hasidic Jews—two women who choose opposite paths.

Though the author has a clear and critical perspective, it’s fascinating reading that sheds some light on this very strict and secretive world; and shows the enormity of the spectrum that exists between people who nominally are practicing the same religion.

At the same time, in some ways it’s hard to read, as a feminist and as a Jew– to learn more about the marginalization of women; and the painful consequences that result from non-acceptance of the strict laws.

For me it’s hard to imagine anyone who would choose the dictates of religion over the human heart.   As a parent myself, I never really understood how my father could sever his relationship with me.  I still don’t.

This post is inspired by I AM FORBIDDEN by Anouk Markovits. I  received a complimentary copy of this book for review purposes.