Since I last wrote it’s been a busy time, and I’ve been meaning to catch up, especially about BlogHer.

It would be challenging to squeeze everything into one post about such a BIG event.  So this is about something….smaller.

The back story started before I got there, when I posted a piece on the Huffington Post.  It was called “Why BlogHer is a Big Deal– to Martha Stewart, Katie Couric and me.”

Katie made it a Bigger Deal, by doing this:

In social media, having Katie Couric tweet your post is a Big Deal.   Although saying that is borderline embarrassing.  Because:

A–is anything in social media really a big deal?

B– Early in her career, just after I left Miami, Katie had the same job at the same TV station. And look where it got her.

C– I hate shameless self promotion

That boost from Katie was nice, and the panel I spoke on was even better. (more on that in another post).   So I was feeling enclosed in a happy little bubble of blog-bliss when I walked into the huge ballroom filled with several thousand people, all waiting for Katie’s lunchtime interview with BlogHer founder Lisa Stone.

The bubble–and the Big Deal–grew even bigger when during her interview Katie mentioned my post—twice.  (Stretching shameless even further, Katie later quoted me on her own site in her piece about BlogHer.)

The thing about a moment of glory is that it’s not complete unless it’s shared.

And for immediacy, there’s nothing like Twitter.  Without going into details (which I’ll do in the near future) I can’t use Twitter with any device I own except for one app on my iPhone.  Which makes the phone my link if I want to participate in social media.

So I waited; and after Katie’s talk, I left the ballroom to shamelessly promote myself.

Only tweeting, urgent and important as it is, had to wait for something even more pressing.

I headed into the ladies’ room.  And just as I shut the door of the stall, it happened.

Right into the toilet.

…leaving me with no phone. No Twitter.  No self promotion.  Just the shame.

Having no phone is bad enough any time—but this timing couldn’t have been worse.   And I had a flight back to California in a couple hours.

In the midst of panic was a modicum of pride.  Because I knew what to do.  Being so active online has infinitely improved my technical savvy.

I didn’t even wait to pee.  I rushed out of the Hilton to a grocery store I had noticed nearby; and I bought two pounds of rice.  (White or brown?  I got both)

Back at BlogHer I realized I needed something to keep the phone and the rice air tight.  So before going to the airport, I had to race around the sponsor booths telling my sad story and begging for a baggie.  Self-promotion was impossible; my little bubble was history; and by then I’m sure Katie was in a limo on the way out to the Hamptons.

So what lessons can I—or you—learn from this little episode?

Actually, there are several.

#1:  The obvious.  Don’t use your phone anywhere near large bodies of water.

#2: The Rice Cure works….sort of.  My phone came back to life when I landed in California twelve hours later, after being surrounded by rice in an airtight baggie all snug.  I was smug—for 24 hours.    Until the phone died again.  Permanently.

#3:  Prevention is a better cure than rice.  Had I studied the sponsors more carefully beforehand—I might have stumbled across this sooner.  Tech Savvy Mama sent me to the Lifeproof booth where they had pity on me and gave me this water proof case—in case there’s a next time. 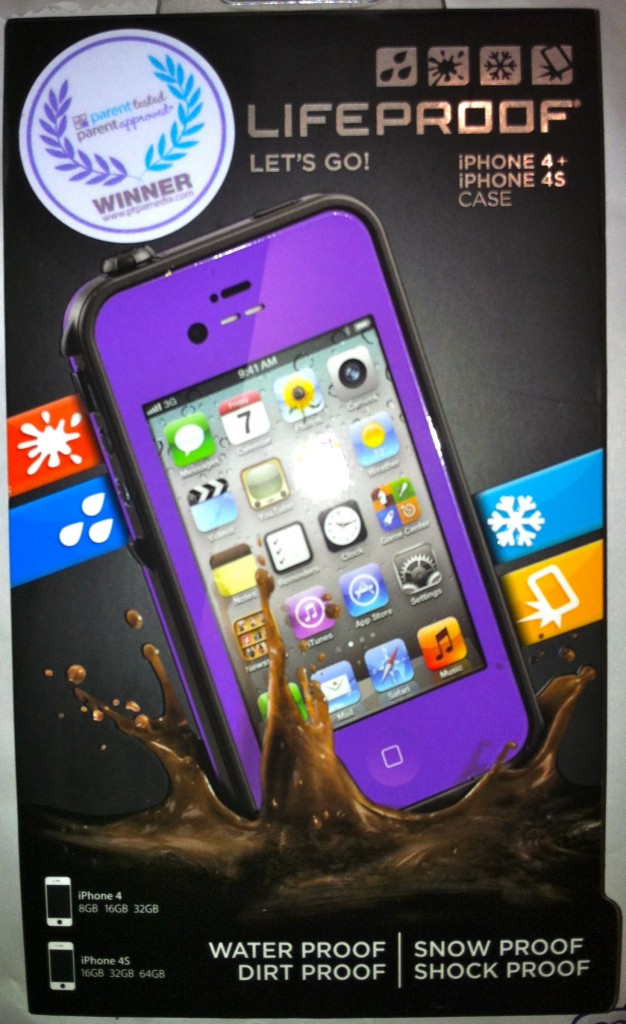 #4.  The final lesson is something I”ve always taught my kids.  When these things happen, just laugh; and remember that later it will make a great story.