You are here: Home / Anything & Everything / Remembering 9/11

Carolyn was one of those rare gorgeous women who didn’t seem aware of how beautiful she was.   We met when my daughter Alli was in first grade, and became friends with Carolyn’s identical twin daughters.  They were just like their mom–blonde and beautiful, with hearts of gold.

Carolyn was going through a tough time–divorced, raising three children alone, under the constant stress of being  a working mother.  Yet she never lost her cool—even the day she was distracted on the carpool line, and accidentally ran her car right into the wall of the school.  Carolyn took that in stride, like she took everything else, juggling her responsibilities yet still able to laugh about it.

Her top priority and passion was always her kids—but there was pride in her work, too.  I remember once visiting her office, when she excitedly pulled me into an editing room to watch the video she was producing for Van Halen.  Called “Right Now”, it knocked my socks off, and later won the MTV award as Video of the Year.

In some ways Carolyn was a role model, since I found myself a few years later in the same situation as hers–going through a divorce, trying to manage working while being the kind of mom who always puts your children first.  Then Carolyn fell in love, got remarried, and settled into a calmer, happier life.

And soon the same thing happened to me—only my remarriage came with a move out of Los Angeles.  Once we left,  I saw Carolyn only on rare occasions when I came to LA and brought Alli to see the twins.  But the girls remained in touch over the years, and the twins were Alli’s last connection to the life left behind in Los Angeles.

Just before her senior year of high school, Alli was visiting her dad in LA, and spent the night at the twins’.  Carolyn, warm and fun as ever, reminisced with her daughters and mine, about their shared childhoods,  just days before the twins would be leaving for college.

A few days later, Carolyn and her mother flew east to enroll both girls at Rhode Island School of Design.  Carolyn was so close to her daughters that she planned to rent an apartment nearby so she could visit as often as she could.  Once the girls were settled, Carolyn and her mom headed home on an early morning flight out of Boston—- the plane that hit the north tower of the World Trade Center.

I found out about Carolyn on September 12.  Distraught, I tried to imagine what I would say to Alli when she came home from school.  I remembered other times I’d been forced to deliver bad news to her:  Mommy and Daddy are getting divorced; Mommy is getting remarried and we are moving away from your school and home and all your friends–and your Dad;  Mommy has breast cancer.  How could I possibly tell her Carolyn was dead?

With the resilience of youth, Alli took the news better than I did, and seemed to recover faster.  I had not been close to Carolyn for years; but having faced death myself, her death tormented me.  I replayed in my head the horror she might have seen or felt in her last few moments, scenes I could not get out of my mind.  It didn’t seem possible that Carolyn, so alive and vibrant, could disappear, just like that.

It took a long time for me to absorb and comprehend.  What was shocking was not just the horrific nature and suddenness of September 11, but this example of the irony and capriciousness of life.  I had desperately envied normal mothers like Carolyn-–healthy, happy, unscarred, doing the simple things like taking children to college.  Meanwhile I was living in fear that I would die, and not experience those simple things; that my children would be left motherless.  Suddenly, in the blink of an eye and a cruel twist of fate, it was Carolyn’s children who were motherless; and Carolyn who was gone, not me.

Soon after 9/11 I heard about a planned memorial at Ground Zero that would be made of a wall of tiles honoring the victims.  I painted a tile for Carolyn, mostly yellow because to me, she represented everything sunny and light.  The project never got off the ground, but I took the tile home and kept it.  Just to have something that represented Carolyn.  Not that I could ever forget her. 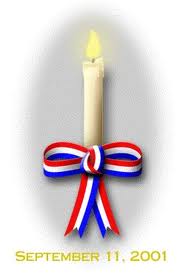