You are here: Home / Aging & Appearance / Something Old, Something New

Something Old— is me.

Something New— is what I’m doing about it.

The Something Old isn’t just me;  it’s also not that old.

It’s a piece I wrote more than a year ago, which was posted on several sites including the Huffington Post.  I  read that same post at BlogHer 2011 Voice of the Year.   (The video is on the right side of this blog.)

The post is about women starting to feel  invisible as they get older—and it’s not their imagination.  In the popular culture, and our youth oriented society,  despite our dominant numbers and dominant spending power, our demographic is often invisible, ignored, or irrelevant.   Sometimes it feels as if the ads targeted to our age feature mostly dentures or dryness (just pick any body part).  There’s a huge disconnect between the way we’re perceived vs. the way we feel, the way we act and the way we are. 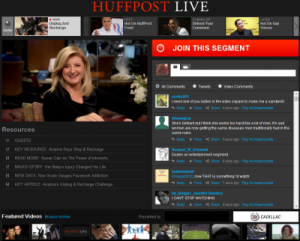 The Something New is Huff Post Live—the new streaming video network that’s been described by Arianna Huffington as a “global conversation.”  To me it’s the very essence of New Media.

Something Old and Something New converge–my post is being featured as the topic for a segment.  I’ll be on Huff Post Live tomorrow (Thursday, Sept. 13, 1 p.m. EST) with several experts to discuss it.  You can join our conversation by commenting or asking questions (before or during the program) —and/or watch the segment live or afterwards. (you can find it here)

Which brings me back to where I started:

Something New–what I’m doing about it–working on a new project that will hopefully help change the conversation and the perceptions about age on a large scale—and have fun at the same time.

As part of a generation which used our collective power to change the world, especially for women, I don’t feel powerless–or invisible.  So it doesn’t seem farfetched to think that together we can change this too—for ourselves and the generations who will follow.

I think it’s about time that our experience, wisdom, intelligence and energy are not only noticed, but respected and valued—as individuals and as a group.

Down the road, if you’d like to be informed and/or participate, please leave a comment here or email me at DarryleP@gmail.com.