You are here: Home / Favorite Posts / Driving home—till death do us part

I drove home from Los Angeles, drained by  the past weeks.  Howard was gone, but he was everywhere around me.  In my car, which he had helped me buy a few months ago.  On the road itself, the 300 miles between Los Angeles and Carmel that he had driven countless times over the years, coming up to visit our children.

I’ve spent the last few months constantly doing that same drive to visit him.  Many years after our divorce, even in the last stages of his illness, he would always call me when I was on the road, checking to see where I was, and then he would call right at the time he knew I’d be pulling up to my house in Carmel, making sure I arrived home safely. That’s who he was.

For all the people who have shared their memories, condolences, who have  felt they’ve gotten to know Howard a little bit through me, I thought I’d share a slightly altered  version of what I said at the service after he died. 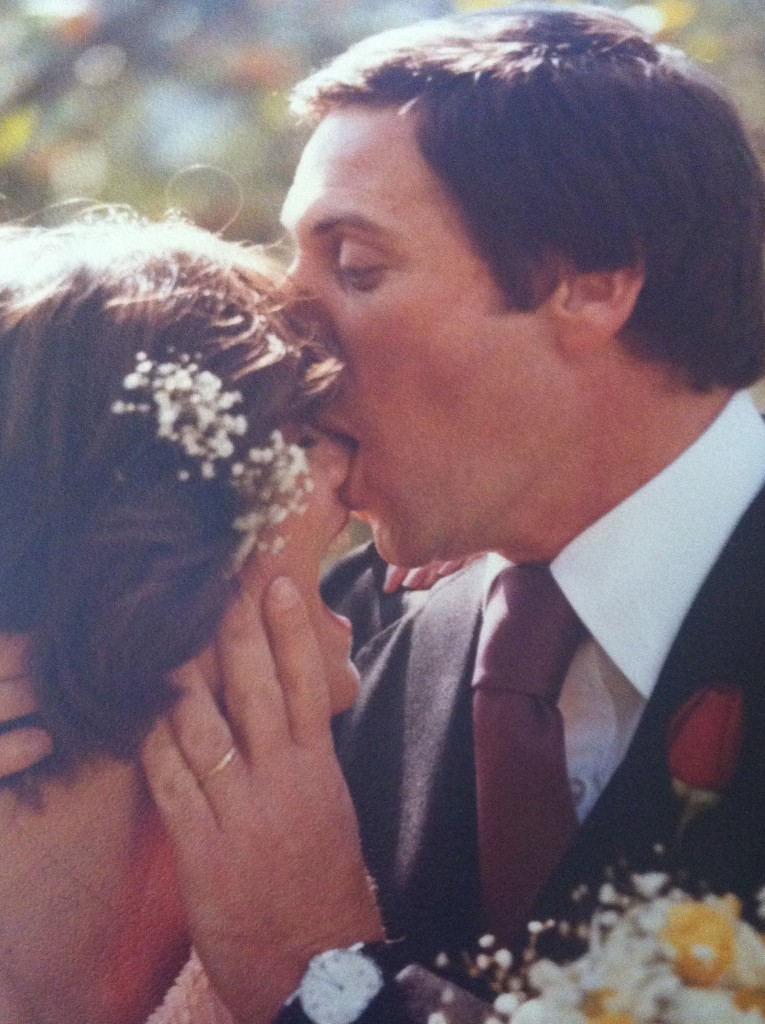 This isn’t a typical wedding photo; but it’s typical of Howard—-always trying to make me laugh.

At the moment we said our vows, however,  I was crying; and I never actually said  the words “I do”.  So he always joked that our marriage wasn’t officially legal.

It sure was binding.   Even after our divorce, even after my 17 years of marriage to V, I’m standing here today.

That is a testament to who Howard was.

When he died, a memory immediately popped into my mind—that goes back to when we had been separated about 6 months.

I was still living in our house in Los Angeles with the kids. After being gone almost a week on a business trip, I came home at night and a few minutes later, Howard brought the kids home.  He had taken them to Disneyland that day; they were both fast asleep in the car in their clothes.   He carried them upstairs and put them in their beds, and went home to his apartment about 15 minutes away.

A few hours, later in the middle of the night, the house started shaking.  It was the Northridge earthquake.   Things were falling off the walls and shattering as I jumped out of bed and raced down the hallway to get the kids.  I brought them both into my bed;   we were all shocked and scared and disoriented.

They were still in their Disneyland clothes ; it was the middle of the night, there was broken glass all over the house, I had no power, no radio, no idea how much damage had been done.

I sat there in the bed  with the two kids, in the pitch black in the middle of the night, stunned and paralyzed and not sure what to do.

I have no idea how it happened so fast;  but in 5 minutes we heard the front door  open and we saw a light and there was Howard with a flashlight;  coming to take charge and take care of us.   A perfect example of life with Howard.

It was January 17 again, 18 years later, when I stood there as Howard died— and it felt like another earthquake.

I could not imagine my life or the world without Howard in it.   I felt like I was sitting  in the dark ;  waiting for him to show up with the flashlight.

Along with his sense of humor, I think that defined him— always taking charge—and taking care of the people he loved.

A few months ago I was getting a new car.  By this time he was getting weaker and barely going anywhere except the cancer center—-still  he insisted on going to the dealership himself to be sure I got the best car—and the best deal.

Just a few days ago, when he wasn’t able anymore to walk or even eat,  somehow he found the strength  to meet for a few hours  in his hospital room with his attorney.  It was classic Howard—–and that turned out to be the last thing he ever did—taking care of his kids.

This entire experience was his worst nightmare and also his finest hour.  It showed Howard’s character at its best.  He’d always been resilient and relentless—but now he was courageous—and heroic.   And still smiling.

That’s the legacy he left all of us.

The greatest gift he gave our children was teaching them do what he did that night 18 years ago—to take charge.

And the greatest gift our children gave  Howard was proving to him that they could do that—so he was able to leave, feeling at peace and secure that they could take care of themselves.

And within moments of his death both Alli and Daniel were already doing that,  were taking charge  of things  even when it meant moving a few mountains.  Howard would have been incredibly proud— but not at all surprised.

Howard:  No one made me laugh more; no one was stronger  or more inspiring.   We’ll always love you and always do what you taught us—to take care of each other.   And bring the flashlight.

When I got home from the drive , there was no call from Howard this time.  But V was standing there right in the driveway, waiting  for me.