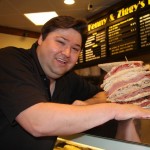 You don’t have to be Jewish to Believe: that blintzes are bliss, pastrami is perfection;  matzo ball soup is magic. Support your Local Deli! If you even have one, you’re lucky.  As documented in the new documentary film Deli Man, delis have become an endangered species disappearing at an alarming rate. We’re down to less […]

What do you do when your kids are Jewish but they go to Christian schools? You won’t find the answers in the Old Testament or the Talmud.  But you might find answers in a cookbook, metaphorically speaking. As someone who grew up in a kosher home,  one thing I never signed up for is that […]

My mother was addicted to chocolate, so I’m pretty sure my habit started in utereo. This semi-sweet story starts awhile after that—in my twenties when I interviewed Mel Brooks which led to a whirlwind courtship, marriage and a move from Miami to Los Angeles. Arriving in LA I barely knew anyone; could barely find my […]

It’s become a yearly tradition at any seder I give or attend; and also a yearly tradition on my blog. For me, Passover means two words:  Matzo.  Roca. Whether you celebrate Passover or not—and you don’t have to be Jewish, either—I consider posting this a public service.   MATZO ROCA 4 whole matzos 1 stick […]

As I write this, my friend Dana is hauling herself up and down the hills of San Francisco  with thousands of other participants on the Avon Walk.   I’m sure I speak for other survivors, to say how grateful we feel to know that someone has your name on their shirt and your face in their […]

Don’t be thrown by the title: this is for people of all faiths.   Jewish or not—-  if you love chocolate you’ll thank me or blame me for this. I’m going to a seder —but when I’m not cooking, the approach of Passover kind of rolls by me.  And speaking of bread, until Daniel called […]