I gave birth to my son on June 21, the longest day of the year.  Naturally it was a long labor.  He was 23 inches, the longest baby the doctor had ever delivered.   Maybe it’s no coincidence that it took such a LONG time to name him. 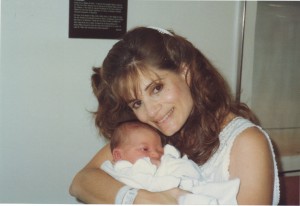 I was about to deliver after 18 hours of labor and 3 hours of pushing, when I realized that both my husband and my doctor couldn’t take their eyes off the clock in the delivery room. Obviously we were way past the need to time my contractions.

The real action was a few miles away from Cedars Sinai. The Los Angeles Lakers were about to play the final game for the 1988 World Championship. The game was starting at 5 p.m.
I delivered at 4:03 and the room immediately emptied out–doctors, nurses, even my husband rushed to the nearest TV set.

After the Lakers won, a nurse suggested we name our baby “Magic Johnson.” In retrospect, maybe we should have considered it.

We had known for months that we were having a boy, and had been arguing about a name nonstop. Howard’s current preference was Michael. It wasn’t in my top 5 but I was starting to cave when we arrived at the hospital.

Having spent years negotiating on behalf of celebrity clients, Howard was justifiably proud of his pit-bull-like style as a negotiator. He knew where to find the jugular, and how to zero in to close the deal at the moment of greatest vulnerability.

I was too drained to do anything but nod when Howard said to me casually, “So it’s Michael?” just moments after I pushed out our 10-pound baby.

The next morning, our 4 year old daughter Alli skipped into the room to meet her new brother. “How’s Michael?”

“Not so fast”, I said. Alli looked confused; Howard gave me a look.

“I was holding him in my arms all night and telling him I love him and I tried to call him Michael but that name wouldn’t come out. He’s just not a Michael.”

Now Howard was pissed off. “I already ordered the birth certificate.”

We brought Not-Michael home from the hospital with a temporary birth certificate that said Michael. When I walked into the house, there were hilarious signs on the walls with funny names for our nameless son that made me laugh so hard, I almost dropped him. Classic Howard. He could make me nuts, but he also could make me laugh.

For a week, I held my position, as I held my son while calling him “baby” or “sweetheart .” The standoff continued. Not the best forecast for a fragile marriage. Still, this was the first time I dug in for so long in 10 years of marriage.

When the baby was 8 days old, family and friends arrived at our home for the bris, with cards and gifts addressed to “baby boy” or “No-name” or “Generic ”

The mohel arrived to perform the ceremony. He ushered Howard and me into a room by ourselves, and took out the certificate to document the fact that our boy would be circumsized in the Jewish tradition. He pulled out his pen. “And what is the baby’s name?”

Howard and I looked at each other, embarrassed. “Can you give us 5 minutes?”

I guess mohels have seen everything. As soon as he left the room, leaving us alone, Howard turned to me. “You really want his name to be Daniel?”

He did have a soft side. I almost collapsed with relief. “Yes!”

Not so fast. To Howard, this was still a negotiation.
“If you get the name, then I get to choose the new couch for the family room.”

A few minutes went by and the deal was officially sealed. A few weeks went by and Howard selected the couch for the family room. A few years went by and the marriage ended. I can’t say the naming negotiation caused our split, but it sure didn’t help.

On the other hand the negotiation was worth it from my side. I never did like that couch in the family room, but our son just turned 26 and he’s definitely a Daniel.