Meeting celebrities is just part of the job when you’re a television reporter; so this was a fairly typical day at work when I was in my twenties.   I was sent to  the Fontainebleau Hotel on Miami Beach to cover a press conference with Sophia Loren, Sylvester Stallone, Henry Winkler and Mel Brooks, all being honored by the National Organization of Theater Owners.

My station had arranged  a private interview with Mel Brooks; my cameraman Larry was a big fan and brought along a box of Raisinets which he knew Mel loved.

After the interview, the guy with Mel handed me his card and asked me to send a videocassette copy of the interview to him in Los Angeles.  I was used to guys like this: I figured he was Mel’s publicist; and either wanted to represent me, or he was hitting on me.

Pretty soon I had the answer.  And somehow I found myself agreeing to meet him back at the Fontainebleau for a drink, after I finished the late news.

“I don’t know why I said ok; I couldn’t think of a fast excuse,” I told my producer when I got back to the station from the interview.  “I’m not gonna show up.”

Nah,  I said.  The Fontainebleau was a half hour away; plus this Hollywood guy wasn’t even my type.

I was heading up to the studio to do the 11 p.m. news when my date called to confirm.  Who confirms a date that’s in an hour?

The call caught me off guard;  and now I couldn’t stand him up. So after the news, I headed back to the Fontainebleau.

The Hollywood guy was waiting outside the hotel, and he climbed into my car.  Now I found out he was Mel’s personal manager; he had made plans to go to a popular nightspot; he had mentioned his plans to Mel; and Mel had invited himself on our date.

Score for my producer.

Sure enough, Mel was waiting when we arrived at the Cricket Club.  The management made a fuss and took lots of pictures. 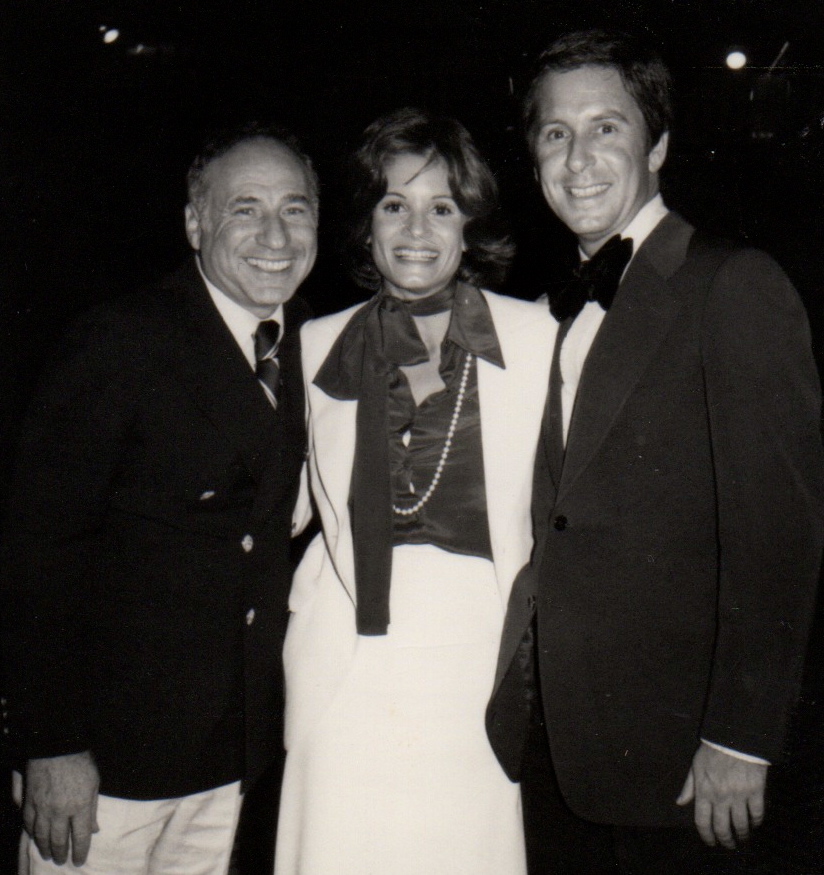 When you’re on a date with Mel Brooks, the laughs and the patter and the  jokes never stop.  He was working the whole room.   I could see Mr. Hollywood had a great sense of humor; but we barely had a chance to say two words to each other.

It was 3 a.m. when we finally got up to leave; and then we found out that  Mel had dismissed his car and driver, assuming we’d take him back to the Fontainebleau with us.

So the three of us headed back in my car–me driving, Mr. Hollywood next to me, and Mel in the back seat.

Even with jet lag, Mel was wired in the middle of the night, and continued entertaining us as I drove towards Miami Beach.  I still knew next to nothing about Mr. Hollywood.

And then Mel got semi-serious—and a new side of him emerged.  He leaned way forward between the two bucket seats,  and aimed a pointed question right at me.

It was the Jewish Inquisition.

Mel pounced.  “Well, you  don’t sound very excited about him.  You should dump this boyfriend, marry my manager, and move to California.”

I was so flustered I missed the turnoff and had to get off the highway—the guys had no idea where we were, but I did— in the most dangerous neighborhood in Miami. I could just picture the newspaper headlines:  Miami Newscaster Causes Injury to Beloved Comic Legend Mel Brooks.

Little did I know that there would be headlines– of a very different kind– in Liz Smith’s syndicated column when I took Mel’s advice —four months later, I married his manager Howard Rothberg, and moved to California.

Howard and I got divorced 13 years later; and the story of how I met my second husband  (18 years so far) isn’t nearly as romantic.  Still I feel enormously grateful to Mel Brooks for being our matchmaker—–giving me the treasure of life-long friendship with Howard, and our two fabulous kids.