You are here: Home / Anything & Everything / Create and connect–by the numbers

It sounds simple.  It was.

It sounds ordinary.  It wasn’t.

This was Creative Alliance,  a gathering of creative women on the internet.   It was extraordinary.

The weekend was filled with conversation.  Creativity.  Connection.

I want to write about it before the experience fades .

The conference was all about creativity;  so I kind of feel I should write creatively.  Only what keeps coming up is something very unlike me and very un-creative—numbers.

So I’m going with that—

That was the temperature  in Ojai.

I mention that because I hate hot weather.  And I would never believe I’d spend 2 days outdoors in 100 degrees and  not notice—and not complain (okay, maybe I did.)

The good news is that we didn’t do anything more  active than listening—but it was very active listening.

Really, only one person  did anything physically active.

Which brings up another nice round number:  50

That’s the number of push ups she did  on the grass under the tent in the middle of the circle.

While she continued speaking.

Sheila Cluff wasn’t part of the weekend group, but she lives in Ojai and owns the Oaks at Ojai.  Hearing about her remarkable life was truly inspring; she’s a force of nature. 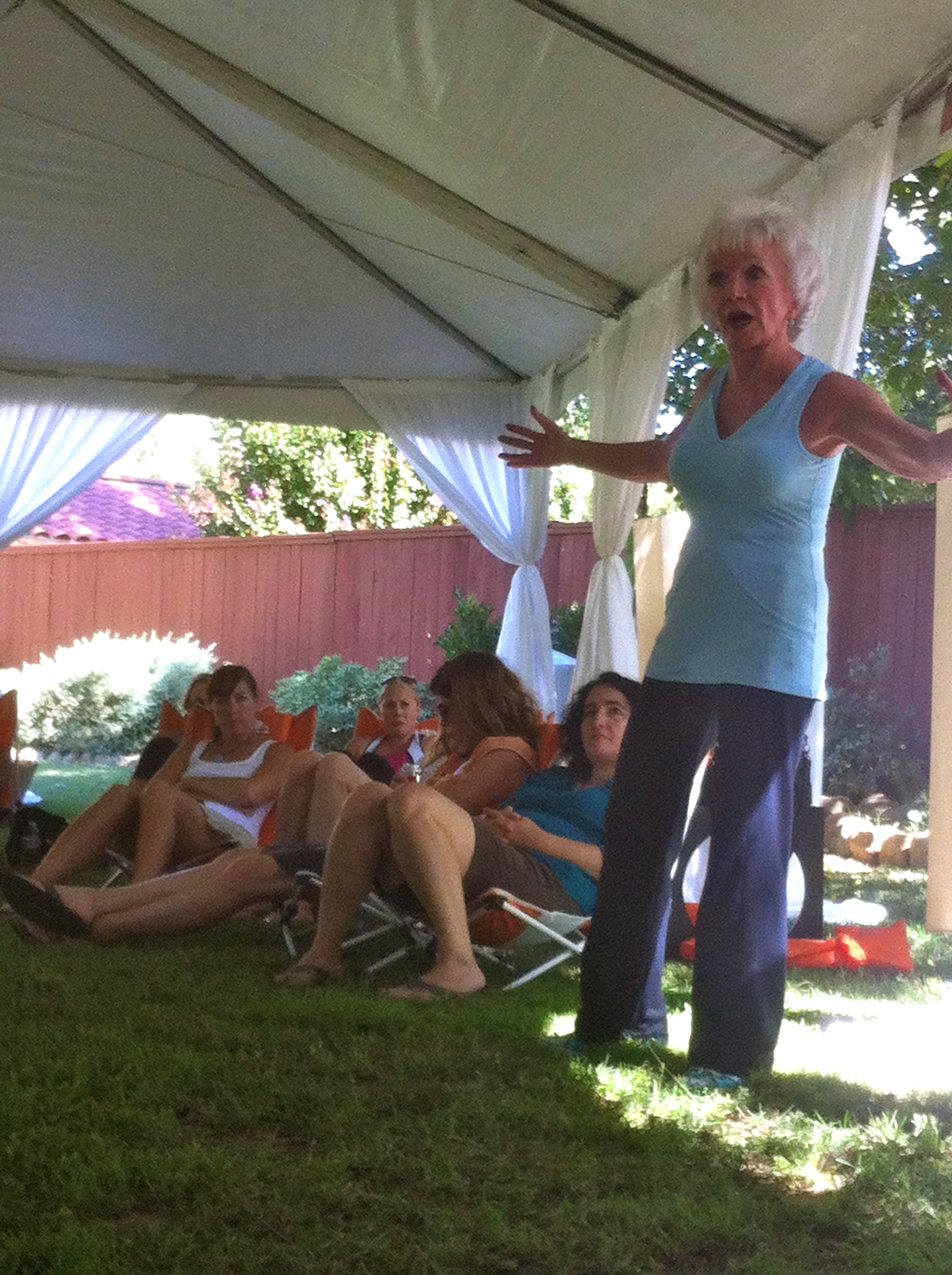 She wasn’t even breathing hard when she stood up after the push-ups.

Which is why I mention this number: 77

The number of words I heard often at this conference.  Both start with the letter B ( 2nd  letter of the alphabet ).

Her name came up in the very first session I attended; and kept coming up.  It seems to be on everyone’s lips these days.

Which is appropriate since the weekend was a perfect example of her work: —all about vulnerability, about daring greatly, about supporting others to do both.

I wrote a post about her recently (she even commented!) and I’ve been absorbing how much her message fits into all our lives.

How much of a difference it makes to be vulnerable.

I was in awe of the women who opened up so readily to share their truths.   I only wish at the time I had allowed myself to be more open, more honest, more vulnerable.

The space under that tent was a safe place  to be vulnerable.  Because underneath was a feeling of trust.

I’ve never been a fan of things like EST—self -help isn’t my style. And this wasn’t that.

This was support.  Offered with no strings.  No you-rub-my-back-I’ll-rub-yours.  Just there.

Now, I don’t want to go all woo-woo; this wasn’t a new-agy type of thing—I mean, these women were from places like Mississippi and Missouri.

Which leads to the most important number : 45

That’s the number of women who attended.

It was much smaller than a typical conference which made all the difference.

And led to one of the great things about it—the mixing of generations.  Decades separated the youngest from the oldest (which wasn’t me, but I’m close).

Which is how life should be.

This is something the internet has opened up to me. And  I think it’s how we stay vital as we age, to continue to expand our minds, our curiosity, our world, and the people we know.

That was at the heart of Creative Alliance—the people.

That was my takeaway, although I really can’t adequately describe or share the experience.

Maybe the best way is to try to put you inside their heads and their hearts.

Another way is to meet some of the women who so bravely and boldly shared themselves.  I wish everyone  could have heard the remarkable words people shared on the last night.  I wish I could introduce every single person who was there.  Since last week, some people wrote posts which captured the essence of Creative Alliance better than my words (or my numbers).   You can click on the names to read them.

My only real problem with Creative Alliance is that it won’t happen again for two years.  And that everyone can’t go—but I hope everyone reading this will seek out their own creative alliances.

My gratitude to Leane Vandeman and Andrea Fellman for making it happen. It was a privilege to be there;  to know everyone who attended; and to call them friends.