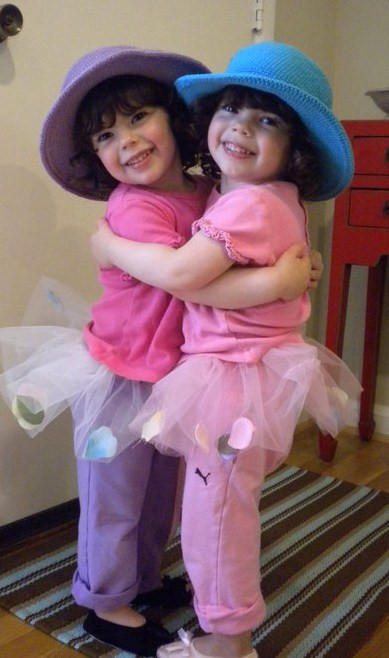 My sister Carla  got married and had children way before I did; and now has identical twin granddaughters–which puts me at high risk for developing a newly identified medical syndrome called  Grandma Envy.

Based on cutting edge medical research, Grandma Envy has not yet been widely reported in the media. I happened to come across a description of this condition in a very obscure medical journal.  Here’s an excerpt from the article:

Grandma Envy (GE) is a newly documented physiological and psychological condition with clearly recognizable symptoms.  Generally the typical GE patient is female, and over the age of 50.   The sufferer will often approach (sometimes even aggressively) small children, particularly infants, often holding them against their will.  Occasionally GE sufferers will find themselves involuntarily browsing in stores that sell baby items, or engaging in fantasy involving their imaginary grandchildren.  They are also highly likely to whine to their adult children, husbands and friends.

Due to the increasingly higher age of mothers, this disease is on the rise; some scientists estimate that as many as 85% of all women over 50 will develop Grandma Envy at some point in their lifetimes.  Treatment options are limited, and researchers are trying to develop a vaccine.  As yet there is no known cure.

Then I read another news item–not in a medical journal.   Apparently Jennifer Lopez is having difficulty finding and keeping a nanny for her twins.

Mrs. Doubtfire was a figment of Hollywood’s imagination but the millions of women afflicted with GE are real.    My concept would not only help fight the growing epidemic of GE, but it would simultaneously solve another growing epidemic.  Because J-Lo is not the only star having nanny trouble.  Apparently Angelina Jolie and Brad Pitt have a monopoly on the premium nanny market, leaving people like Nicole Kidman and Halle Berry in the lurch.  Not to mention all the new mommies who are not Hollywood celebrities.

This is a win/win situation all around.  For the movie star too busy to check out references: no problem.  Just check out the nanny’s kids and see how they turned out.   Your new nanny will be able to tell the difference between a waffle iron and a curling iron.   And a mob of paparazzi is a pushover for someone who’s already raised teenagers.

The wannabe Nanas win, too.  It takes the pressure off their own kids while giving them valuable hands on grandparenting experience.  They also gain new status in their communities, score free tickets to the latest Matt Damon movie, and travel all over the world in a glamorous lifestyle that beats watching their husbands watch the golf channel.

I’ve never been obsessed by infants.  But I’m thinking of applying to be the nanny for those adorable Beckham boys.