You are here: Home / Popular Culture, Celebrities & Social Media / the world is watching 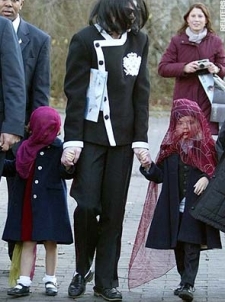 And I’m still watching, too.

Despite my protests, I have to say it’s mesmerizing.  Not just the life of Michael Jackson, not just the questions surrounding his death, not just the outpouring of admiration for his talent.

Mostly I keep thinking about the children—his children, and all children.    In some of his important relationships—like Elizabeth Taylor and Lisa Marie Presley— celebrity childhood seems to be the common bond.   It’s an example of  how much our childhood experience impacts our lives forever.   And the responsibility we bear as parents.

Ironically, one of the reasons I stopped being  on television was my neurotic  fear for the welfare of my future children.  As a drama queen,  I was thinking more about security (physical) than insecurity (emotional) .  And since then, the culture of celebrity has expanded—-not only in importance but in scope.    It’s a strange time we live in.   Pretty soon everyone will get 15 minutes.    Thanks to reality television— not only do people WANT to be celebrities,  more people ARE celebrities.   Just before Michael Jackson died, the country seemed to be obsessed by Jon and Kate Gosselin,  famous only because they have sextuplets, a total of 8 children.

Celebrity children again.   I’ve never seen the show but from what I’ve read,  those 8 kids don’t have a prayer of a normal childhood, anymore than Michael Jackson’s kids.

And then again, I can’t say MY kids had a “normal” childhood either.