You are here: Home / Anything & Everything / They shoot horses, don’t they?

“When the lightning lightninged and the thunder thundered, the old men would sidle up to me and say, ‘Do you know what that is kid?’ And I would say, ‘Yes. That’s Rip Van Winkle bowling with the little people.’ And the old guys would laugh like loons and say, ‘No, you idiot. That’s thunder!!'” (Jack Douglas in “My Brother Was an Only Child” [The quote may be off a little since I read the book in junior high school.])

At around 5 am this morning, the thunder thundered and most of us were dreading going outside and being drenched within the first five minutes of riding. When we emerged from our eye clinic (known to some as the Bat Cave) where we stayed overnight, the storm front was gone. Good news. No need to wear that treacherous rain jacket.

In a feat of willpower heretofore unseen, I rode past the breakfast burrito place. In fact, no place looked good early on, and it was a while before I finally had a healthy breakfast of frozen fruit cup, a pork sandwich and a ground beef sandwich. Also, I managed to down two very little homemade donuts. But at least there was no breakfast burrito!

The problem was that I ate too late. I needed more food in my system sooner. By mile 30 I was beginning to drag. Today was planned for 77 miles. There was an option for riders who wanted to complete a century ride to cycle an extra 25 miles. If you rode that loop, you could get a patch that indicated that you completed the 100 miles. As far as I was concerned, you had to be a complete idiot to seek out another 25 miles of riding. “We don’t need no stupid patches!” So, as we set out to ride, I told my teammates, some of whom were planning to do the century, that I would decline this “great opportunity.”

Around mile 33, I got a call from Mitch who was waiting around mile 36 or so, where the extra loop for the century was located. Since Mitch had to drive the support truck to the midway point, he was relatively fresh. I was in super slow, Beaky Buzzard mode, so it took me a long time to get to Mitch who had been waiting patiently. I thought it would be bad form if I told him that I was not going to ride with him after all, so I decided to do the loop and the century. After all, what’s 25 miles between friends? Just shoot me.

We traversed the loop, which included some beautiful spots. Here is a very pretty lake.

Mitch was convinced it was the Atlantic Ocean. I told him to wait until I got back or until they Queen Mary docked–whichever came first. I was unable to make a fast getaway, however, as Mitch realized after several minutes that the Queen Mary was no longer in service and was docked in Long Beach, California.   We soldiered on,  passing the Sag Wagon where someone called out “patches” which Mitch and I thought was a tire repair spot. 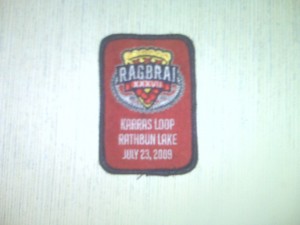 It was only later when we were told by Val, and his friend Tom Rugh (who joined the ride yesterday), that we missed the opportunity to obtain the coveted patch. Later, in a tear-soaked ceremony, Tom offered me his patch–which I promised to display prominently on my monogrammed French-cuffed shirts, which I will certainly wear when dining on the Queen Mary. 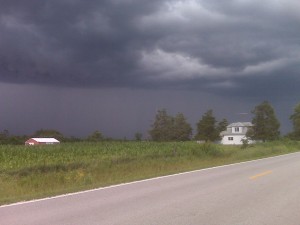 Although the weather was great throughout the day, about 10 miles out of town, the sky grew ominous. Black clouds formed in the distance and the wind began to gust.

The skies opened up before we got to our host home. We were drenched but we made it. Thirty minutes later the sun was out. We hung out on the front porch, which happened to be on the main bicycling route, and played with the neighborhood kids.

Tomorrow is supposed to be only 77 miles. If I start to hallucinate and volunteer to ride longer, I am authorizing my teammates to put me out of my misery.