You are here: Home / Anything & Everything / The Long Hard Journey into night

First, I want to start with some clarifications from yesterday’s blog. Yes, I am still of sound mind. And, the last 35 miles yesterday were not bad.  Second, I have written waivers from the kid in the last picture.

Now that the formalities are out of the way, it is time to introduce you to the remaining members of the team.

Shortly after I decided to ride RAGBRAI, I had lunch with Joanna McIntosh, a former colleague and long-time friend. When I mentioned my plan to do the ride, she told me that she and two of her colleagues at Verizon, Ed Senn and Clark Rachfal, had done the ride twice before. Of particular note, Clark is partially blind and rides on a tandem. Indeed, he and his riding partner Dave, the pilot, have won cyclying awards as a team. So, Joanna, Ed, Clark and Dave have been a part of the team. Unfortunately, Joanna broke her foot shortly before the ride began. She remains a team member, though. Clark’s presence on the team has generated a great deal of publicity for the CFCMD and Project 3000. When I am in a better position to do so, I will send you some links to the wonderful stories that have been done on Clark and Dave and the Project 3000 effort.

Today’s ride was not exactly what we expected. We knew it would be long. And, it clocked in at just under 80 miles. But, it was supposed to be flatter and easier than previous days. For the first part of the ride, we did have mostly flat roads (except for getting out of our overnight town). 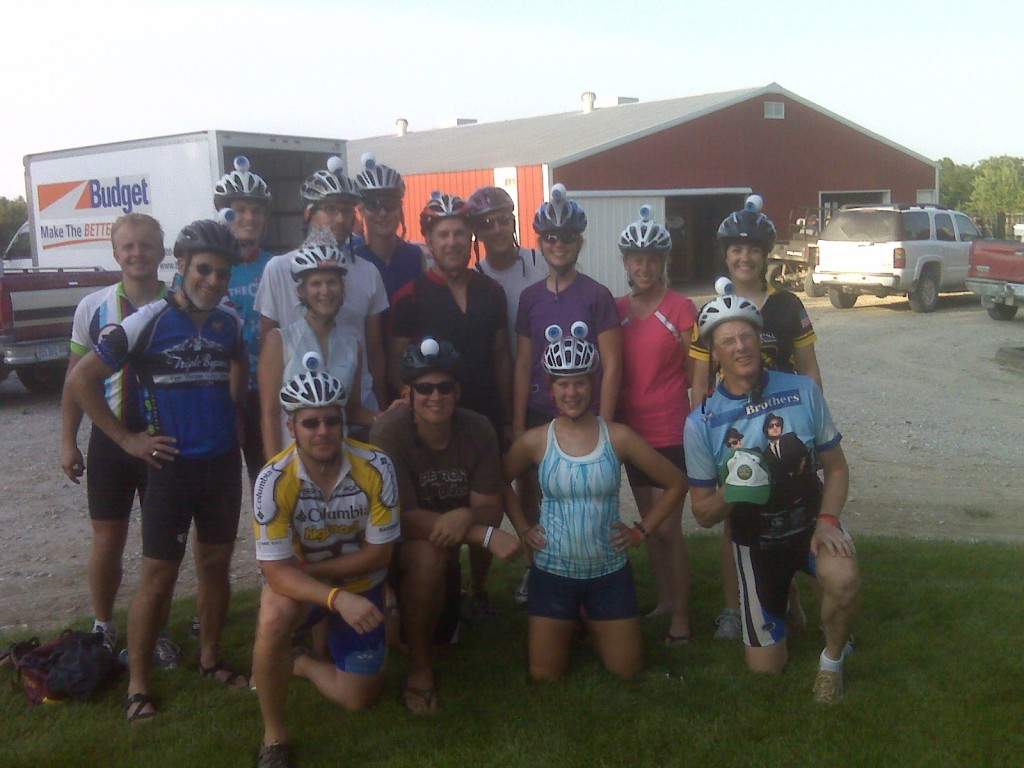 We were in good spirits, and we were sporting a new appendage to our helmets–an eye, made out of styrofoam and other materials.  Our resident pastor and spiritual advisor, Sherami (rhymes with bury me), apparently has some arts and crafts background. She devised the idea of putting eyes on our helmet so we could be recognizable as a team and generate focus on our cause. It worked. Many people asked us about the eyes on our helmets and we were able to spread the word about Project 3000. Sherami (rhymes with tsunami) knows something about spreading the word.

Anyway, the second half of the ride turned out to be tougher than expected. We rode into a stiff headwind, with more hills than predicted. It was hot. Not even a stop at the homemade ice cream stand was enough to assuage the inner demons. We made it, though, and are staying at a beautiful farm outside of Mt. Pleasant. We had a swimming pool and a pond and lots of amenities.  Once again, we have been treated royally–or as I like to think–appropriately. Just kidding. Kelly, our host of hosts, even offered me a couch, although the house was packed with guests. I politely declined, saying that on this last night, I would sleep with my peeps. 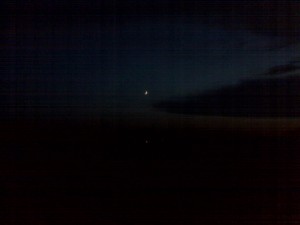 While thunderstorms threatened, we had a gorgeous night.

People are a little tired and perhaps a little sad to see it end. Tomorrow is a relatively quick 44 mile ride and then I have to hustle to the airport in Cedar Rapids.

Off to my tent.