You are here: Home / Anything & Everything / The World is not Flat 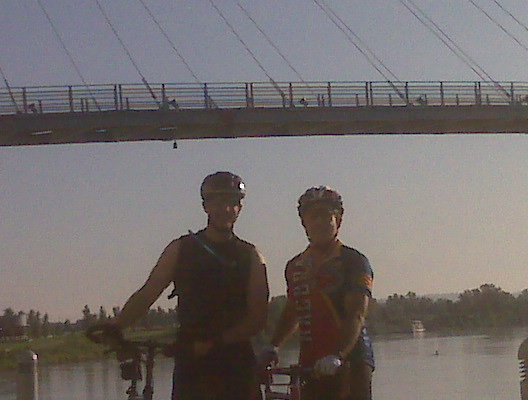 The day started off beautifully, as the fog filled the valley behind our hosts’ home. We drove to the start, which for us was the Nebraska side of the Missouri River.   Here Mitch and I get ready to cross the bridge to … Iowa.

After about seven miles we stopped for breakfast at Farm Boys. Great breakfast burritos. We later met up with some other team members.

The RAGBRAI website made it clear that this year’s route was somewhat hilly. It promised about 3,000 feet of climb. That’s not exactly the mountains of Colorado, but there were plenty of hills. It was no picnic. No, it was a PARTY. 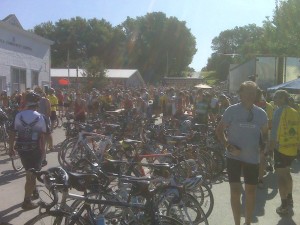 By the time  we reached the first town,  Minneola, about 17 miles down the road,  it was 10 a.m.  People were partying. Music blared. Beer was everywhere. The tiny street was jammed with traffic. So, THIS is how it is going to be.

Shortly after Minneola, the team spread out. I was supposed to meet some of my team members in the town of Henderson, but apparently I blinked when I went by and missed it. So, I was without my team. Then I spotted an oasis. 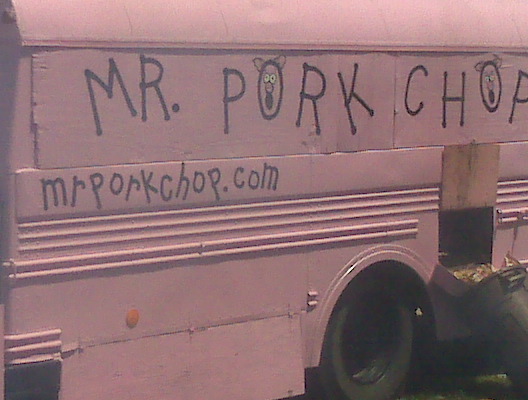 As I got closer, I realized I was not seeing a mirage, it was the pink bus that contained Mr. Pork, the famous purveyor of $6 pork chops.  I jammed on my brakes and got in a long line. As long-time counsel to the National Pork Producers Council, I felt it was my duty to support my clients.

After wolfing down my chop, I was in no condition to run wee wee wee all the way home. And while I am mixing children’s tales, I did take advantage–as numerous others have done–to relieve myself in a corn field. (Note to self: don’t eat yellow corn).

As I ambled back to the little patch of humanity that would have called itself civilization, if it were on speaking terms with itself, I spied the Kerry’s pies stand. Eureka! By missing Henderson, I was falling behind on my pie goals (please pronounce the hard G, if you are reading this aloud). I had calculated I needed to taste 3.14 pies per day, if I were to meet my objectives. Kerry was offering large pieces of pie for $3. I asked the girl whether I could buy 5 small pieces instead. She looked at me as if I were from … someplace else. Anyway, I bought 2 pieces. But, contrary to Darryle’s comment yesterday, I did not eat all of each piece. Instead, I was waiting for my team to ride by when a woman noticed some abandoned pies near me.  I told her that she could have them–and I only asked one thing: that she go on this blog and confirm that I didn’t eat the pies myself.    (She also stood next to Mr. Pork Chops bus with me. But she didn’t have any of my pork chop.) 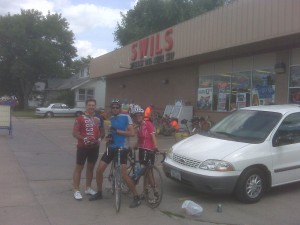 When I rejoined Brett and Lynn from Tuscon and the rest of my team, I chastised them for not being around when I needed them to help me share the pies.  They reminded me I was the only team member to make two wrong turns before finishing an entire can of beer.   To get in the proper frame of mind, we bought some beer at the Southwest Iowa Liquour Store (SWILS). Trust me. I looked at the wine “selection.” The name fits.

We are staying with another wonderful host family, who again, are incredibly hospitable. They have guests staying with them, so “a camping I will go.”

Did I mention “I never signed up for this?”

Pie Totals to date: 2  (before dinner)