You are here: Home / Anything & Everything / "Great minds think alike"

Besides Daniel coming home, my nephew Aaron is also visiting–he’s the one who got us to—and from—the Obama inauguration.  So since he gave me a piece of American history I returned the favor with some family history— going through some boxes with my father’s and mother’s notebooks from high school and college.  To me, this stuff is endlessly fascinating;  I can’t bring myself to get rid of  it.

Which is why, after 8 months of cluttercasting, even though people assume our house must be clutter free– it’s actually a lot a little  worse.   Somehow—the more clutter I clear out, the more I find.

I felt better about myself this week— when  I realized my clutter isn’t a problem but a sign of creativity.  Maybe even genius.  Because  “Great minds think alike.”  Turns out that  Andy Warhol  had clutter issues, too. 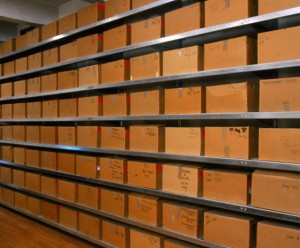 He saved everything and jumbled it all together in “Time capsules”— cartons containing haphazard stuff from scribbles on scraps of paper to pieces of wedding cake to Campbell soup cans that are now oozing out over the more valuable stuff—like a box filled with $17,000 in cash, and a recently discovered nude signed photo of Jackie Onassis.

My clutter—although fun—isn”t quite as valuable.   So while my clutter is shipped out piecemeal to homes across the country, the best of Warhol’s stuff  will be part of his archive at the Andy Warhol Museum in Pittsburgh.  I might have to make a pilgrimage sometime—to see what’s culled from the clutter that filled his four-story home and who knows how many storage containers.

Starting this fall, the archivists are going to highlight an object from his collection every week— on a new blog.   I’m not suggesting their idea was stolen from Cluttercast:  Just saying—- “great minds think alike.”

Meanwhile after reading about Warhol I think I better pick up my pace.   They’ve been sorting thru his clutter since 1991.