You are here: Home / Anything & Everything / Save us from the stuff we save

It used to be my own dirty little secret.  And then I started to read more about it—such as a recent  UCLA survey which estimates 75% of American families have so much stuff crammed in the garage, they can’t get the car in it.

That made me felt much better about myself.

Not because I can fit a car into our garage.  I can’t.  But because I’m not alone.

My name is Darryle and I’m a stuffaholic.   My “habit” is so pervasive and common, soon we’ll have support groups, interventions, 12-step programs, stints in rehab.

Mostly I wish it would all go away.

Not just the stuff—but the advice on how to deal with it.  Like last weekend’s piece by Gretchen Rubin in the New York Times—which actually had some good suggestions

I wish I could come up with a better word to describe the stuff that fills my house, and even my brain (The subtitle of my blog was Confessions of a cluttered mind.)  Then again I guess “clutter” is a kinder way to say it.

Sometimes I think the problem is just the way stuff is stored—-would it still be called clutter if it’s well-organized?

My storage system is totally random—not just where it is but what it is. 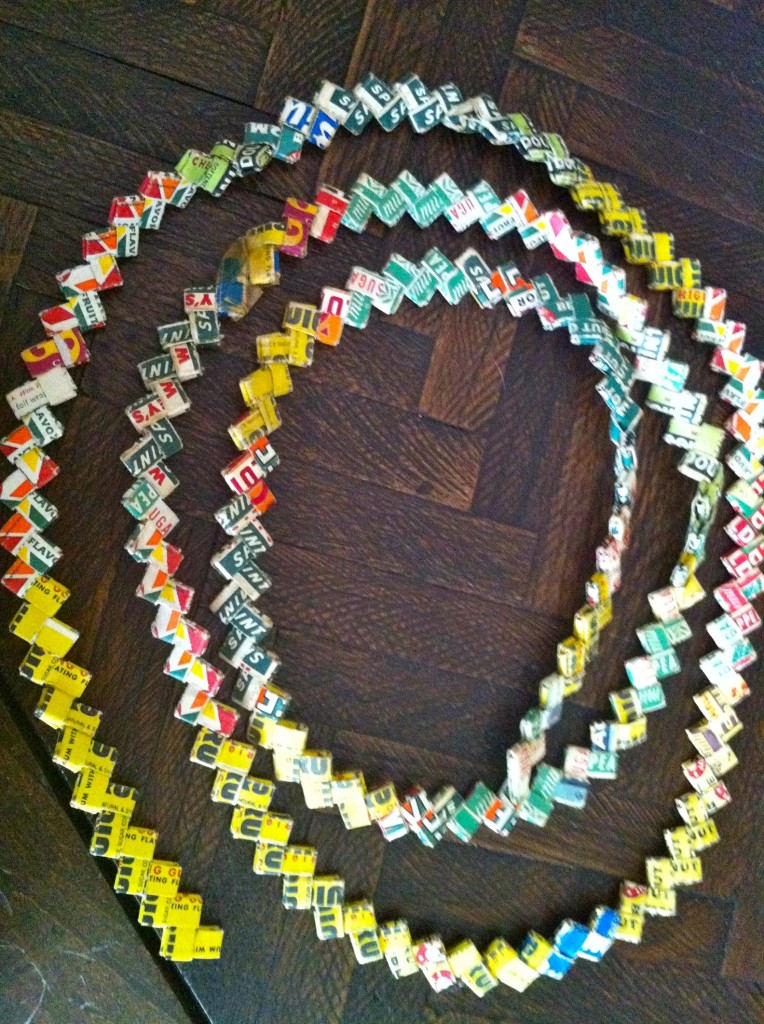 If only I had decided to hang onto Barbie dolls and vintage lunchboxes that would be valuable collector’s items —instead of what I actually kept—like the homemade costume from camp when I played Daisy Mae or this 6-foot long gum chain I made in 8th grade.

You’d think I would be done with clutter  by now anyway.

A few years ago  I created a blog called Cluttercast—every single day I would describe an individual item—and send it for free to anyone who wanted it.

I lasted a year.

End result:  I still have most of my clutter.  And my several hundred Cluttercast  posts just created MORE clutter on the internet.

I’m a certified clutter magnet   But my stuff is not just mine.  And it’s not my fault.

Like any other parent, I have my kids’ stuff—including every homework assignment my son completed in third grade.  (Not my fault since third graders shouldn’t have so much homework.)

Having a soft sentimental streak makes me the obvious choice to wind up with stuff no one else wants.  For anything ever owned by anyone in the family, I always assume that the next generation will want anything of historical value.

That’s why I kept my father’s college chemistry course notebooks—though I never took chemistry and can’t understand a single word even if I could read his handwriting– which I can’t.

For the same reason I assume someday my kids will want MY college course notebooks, which I’ve also saved.

Although I’ve noticed my kids don’t even save their own college notebooks.

Which brings up how my kids feel about my clutter.  I always considered my “habit” just an annoyance; and figured I had plenty of time to deal with it before anyone else would have to.

And I got some insight when my ex-husband died a few months ago.  We were still close; and recently I helped our two adult children go through his stuff.

Growing up surrounded by my clutter apparently affected their approach– and made them more  practical.  Their dad was highly organized and did not accumulate stuff at my level; still, they got rid of ALOT.

I never know where to draw the line between sentimental stuff and clutter-–anyone who has ever tried sifting through memories of a lifetime knows it’s poignant and hard to do.  It was especially hard to restrain myself from taking his stuff home with me—accumulating even more clutter than I already have.

This experience got me thinking about what will happen when I die.  So when I returned home from Howard’s extremely neat garage (where he kept his car), I took a look at ours. 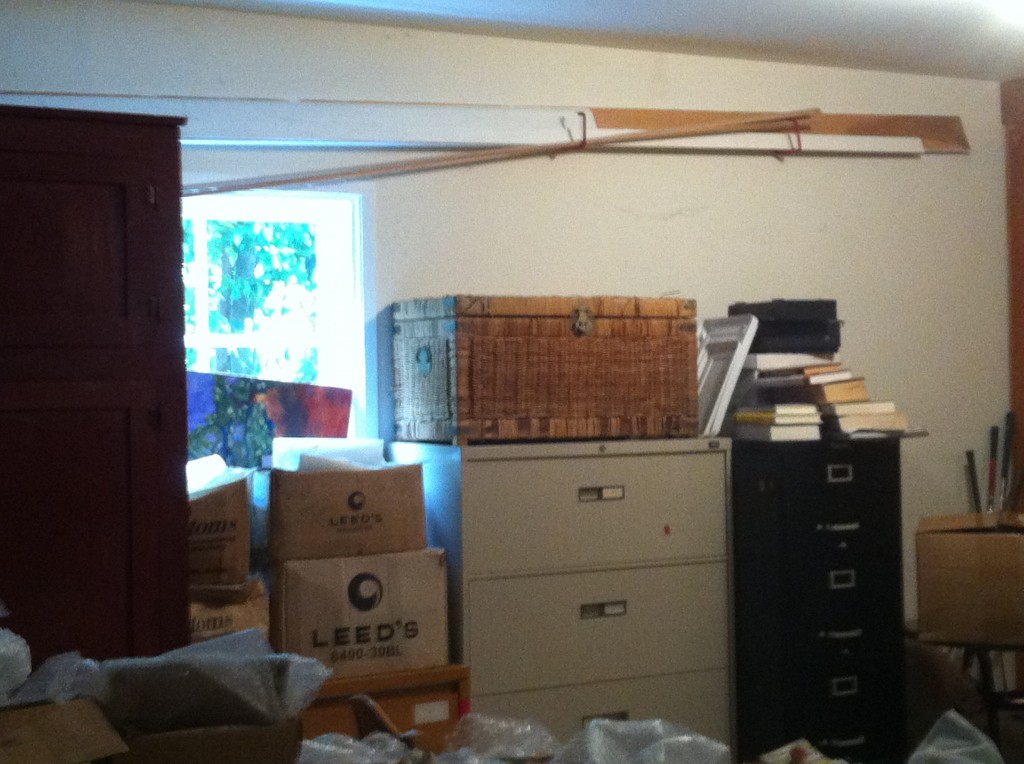 It gave me a headache.

The rest of the garage is even worse.  I thought I’d start small; and zeroed in on this one section.   Forget about going through file cabinets I haven’t opened in 10 years– instead of dealing with what’s IN them, I looked at what’s ON them. 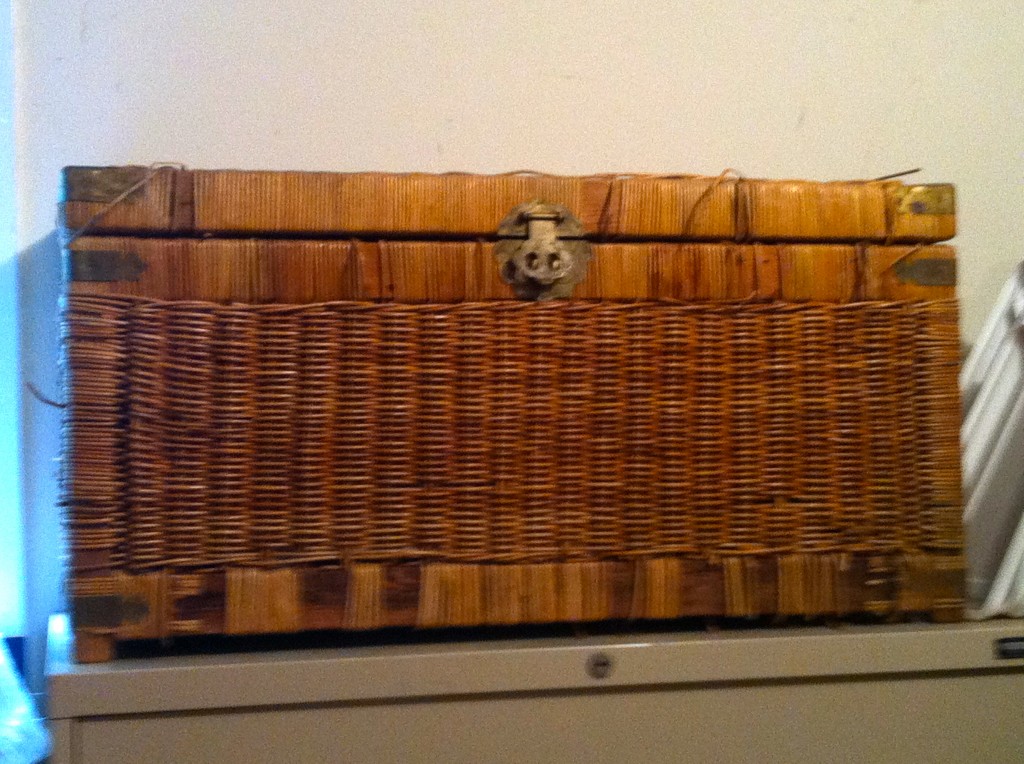 It screams seventies and I know exactly when I got it—it was in my college dorm room.

Do I really need it around anymore?  I resolved to be more like my kids—more practical.

Hey, it’s practical—I can use it to store more stuff.