You are here: Home / Health and Cancer / the gift of a life

“Feeling happiness and gratitude—and thinking you can’t feel one without the other”:  That’s what I wrote to update my Facebook status earlier today.    Right afterwards I sat down to write a blog postscript on my birthday—- when the phone rang and pierced my cocoon of chocolate and family.

Now… a few hours and a lifetime later… I’m back to that post.  It still has a birthday theme—only not mine— someone else who  had a 60th birthday this summer.    That’s just one of the things we have in common—-in addition to names that rhyme and both having breast cancer.

Unlike me, Carol didn’t call attention to her 60th birthday a few weeks ago.   When we talked that day, she was on the east coast, where she’d received the birthday gift of her life—her first grandchild.   She was blessed to be there at Hazel’s birth a few days earlier, when this photo was taken. Cool calm Carol was hysterical over Hazel.  In a good way.  Though we had plenty of other stuff to discuss, Hazel was now the main topic of conversation— while painting pottery a couple weeks ago, or chatting last week at an engagement party.   Sharing the latest baby pictures made Carol ecstatic—and eager to leave next week to fly back across the country to see Hazel again.

Instead Hazel and her parents will be here— to say goodbye to the grandma she will never know.

Another spin of the circle of life.

In the end it was very fast and unexpected–  as much as it can be for someone who has been battling stage 4 cancer for as many years as Carol.   Still it is sudden and shocking— and it feels impossible and wrong.

She was starting a new chemo.  Last week she had shaved off her hair  in advance of losing it.   She did the same thing last year just before our trip to a breast cancer retreat. 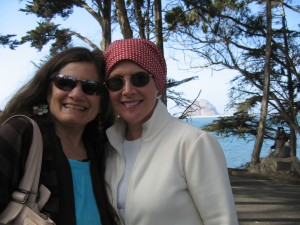 Carol’s hair strategy was far bolder than mine.   I hung onto every last hair on my head in hopes of saving it.   And while I hid under huge hats and wigs, Carol —who had great hair—had far more aplomb with the bald and brave look— baseball caps and scarves.

Her ability to handle the hair thing was only one difference.    When I first got breast cancer, Carol befriended me when I needed support–-and I was there to guide her when she was diagnosed a few years after me.   My case was far more complicated, with a worse prognosis—but my cancer never came back.   For whatever I taught Carol about breast cancer early on,  it didn’t compare to all that she taught me later— about handling cancer’s capriciousness and cruelty with courage and class.

I occasionally wondered how Carol could stand to be around me.  If our roles were reversed,  I know I would have found it hard to be friends with someone whose very presence was there to remind me of my own tough luck.  But this never seemed to bother Carol—in fact,  it was characteristic of her generosity.   In addition to all she gave me—-was carte blanche to write about her.    Right now I can’t accept or even think about it— that instead of celebrating our 60th birthdays together,  I’ll be celebrating her life—the gift of her life.

Sometimes  I write about cancer in a way that to some, might seem confusing—-as an experience that made me laugh, or gave me things— such as courage, and art, and perspective.   Though I’m grateful for some things in life that came from my having cancer,   I never  think of cancer as a gift—- it takes away so much.    And though I manage to find the humor in everything, including cancer—- the truth is that for all the times cancer has made me laugh, there are far more times when it makes me cry.