You are here: Home / Aging & Appearance / beyond my control 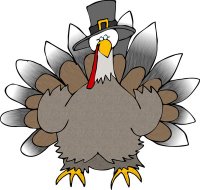 For reasons beyond my control, we’re not making our annual pilgrimage to the east coast for Thanksgiving. I’ve been hearing from my sister and her family how much they’ll miss us.   And while I’m sure they mean it,   there will be benefits to our absence.  Mostly financial——without me and Daniel around,  they only need to buy half the amount of food.   Plus I’m sure my brother-in-law is secretly glad he won’t have to compete for leftovers.

On my side, the best part of staying in California is staying out of airports.    But I’ll miss not seeing the family, and eating my favorite meal of the year.  Plus,  Thanksgiving on the west coast hasn’t always gone well.

For starters, no one prefers having me cook.   Especially me.    But the main problems haven’t been food-related.  The last time I made Thanksgiving dinner we had technical difficulties.

It was two years ago.   The night before Thanksgiving, Alli came over to help me do the baking.   It took one sacrificial  pumpkin pie for me to figure out  the second oven didn’t work.  I had never once tried to use it in the two years we’d lived in the house.

Oy.   What would the Pilgrims do?

Well, none of our relatives came over on the Mayflower— but our ancestors did flee from Pharoah into the desert;  we could scale down to one oven instead of two.    They were forced to bake matza instead of bread;  we had to bake our corn muffins in the toaster oven.

But Moses and the Israelites didn’t have turkeys to cook; and we had two.

We took the second turkey to a friend’s house a few miles away;  while she was in Hong Kong, her son was staying with us.    This was a creative strategy…. until V locked himself out of her house—-leaving the car keys and the turkey inside.  Fortunately he got a locksmith—- instead of wandering in the desert for forty years.

This year, we’re going to my former sister-in-law’s in Los Angeles.  My nephew Max is cooking—which guarantees me zero responsibility and  a fabulous meal.  It could be a stress-free Thanksgiving—if there wasn’t a glitch about getting together with my ex-husband’s family.

It’s not what you might think.   I don’t see H’s family often;  but  everyone is congenial and friendly.  Max’s brother James actually got married in our house a few years ago.  Only one thing about this group doesn’t sit well with me.

Last time we all ate over at my sister- in- law’s,  my nephew James leaves the table after a huge dinner, and comes back from the bathroom with ….a scale.

First of all,  I think scales should be illegal;  or at least,  invisible.    But he brings the scale and puts it on the floor and WEIGHS himself right next to the table. Where people are eating.    I would have lost my appetite—if I hadn’t already eaten so much.

James isn’t the only guilty one.   ALL of the men in the family hopped right on the scale, too.

The most unsettling aspect of this episode —-is that last spring when I got together at H’s house for dinner with his side of the family…. it happened AGAIN!

What kind of people weigh themselves in public after a big meal?   If I had witnessed this mutant family trait while H and I were married— I might not have stuck around long enough to produce two children.

Even so, I was kind of traumatized by these public weigh-in’s;   still I thought I handled it well.    But Thanksgiving is a whole other story.

If a scale should appear anywhere near me at Thanksgiving dinner….  heads will roll.

And not just the turkey’s.