You are here: Home / Parenting & Family / The Miracle of Thanksgivukah

The regular chef on the LA side of our family, my nephew Max, was going out of town; so I volunteered to host Thanksgiving this year.  Even though I’m totally disorganized; and I stress over entertaining large groups.  (any number over 2)

The last time I made Thanksgiving dinner on my own, among the other glitches, we had to bake some stuff in the toaster oven; and my husband locked himself out of an apartment where  our second turkey was cooking in the oven.

Knowing all this; and being an extremely thoughtful person, my daughter Alli wrote me an email a few months ago, suggesting that I allow her (with her boyfriend’s assistance)  to take over the planning and cooking of the entire meal. She made her case with an explanation of why this was a good idea, how it would allow me to relax; how she was enjoying cooking lately; how she would practice every dish in advance so it would be perfect.

She had me at Dear Mom.

My brother was coming from out of town; and he loves getting a rare opportunity to cook.  (How did I get in this family?  )

So Alli conferred with her uncle, and addressed the details with her typical military precision.

My brother Josh would cook the turkey and stuffing and one special casserole; Alli was in charge of planning and would cook everything else

My job? Just  the pumpkin bread.  Right in my comfort zone.

Alli also conferred with me in advance on every possible kitchen utensil she might need.  With good reason.   One box of pots and pans and condiments and silverware never showed up in LA when we moved.  So I’ve mostly done without them ( a handy excuse not to cook.)

My brother made the stuffing the night before and got the turkey in the oven Thanksgiving morning.

Alli lives an hour away; and drove up with the entire contents of her kitchen.

This made her strategy pretty clear.   During the planning phase, she would ask me in advance if I had something, say olive oil.  And even if I had said yes, she brought it anyway.  Her own olive oil, her own butter, gourds to decorate the table, even  her own menorah. 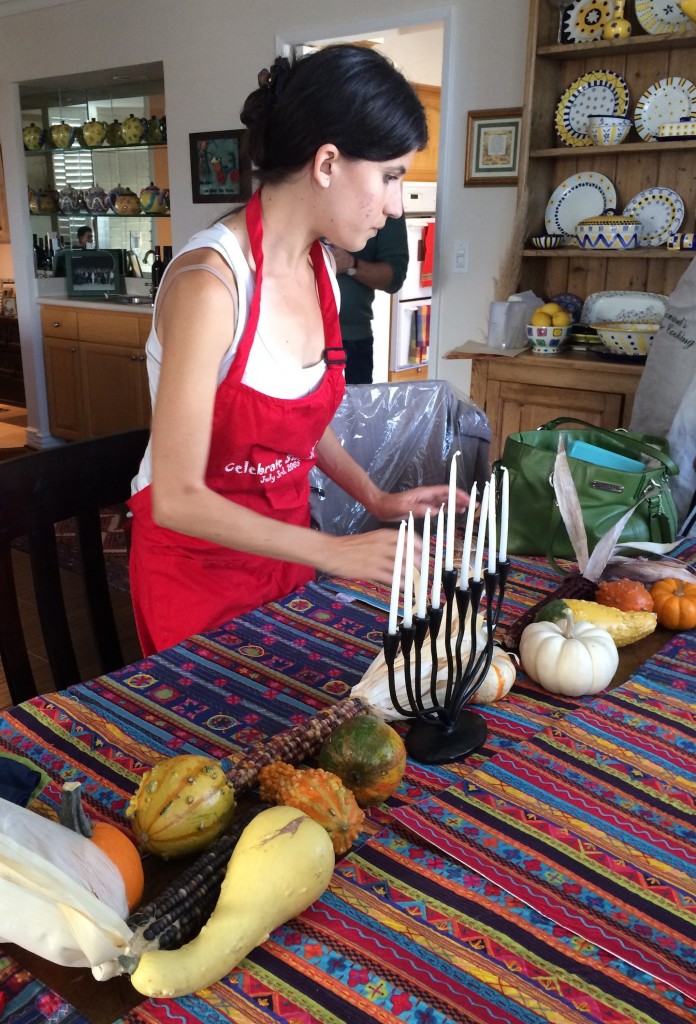 Should I be embarrassed that I set the bar so low?

Appetizers started coming out of the kitchen soon after she got there. 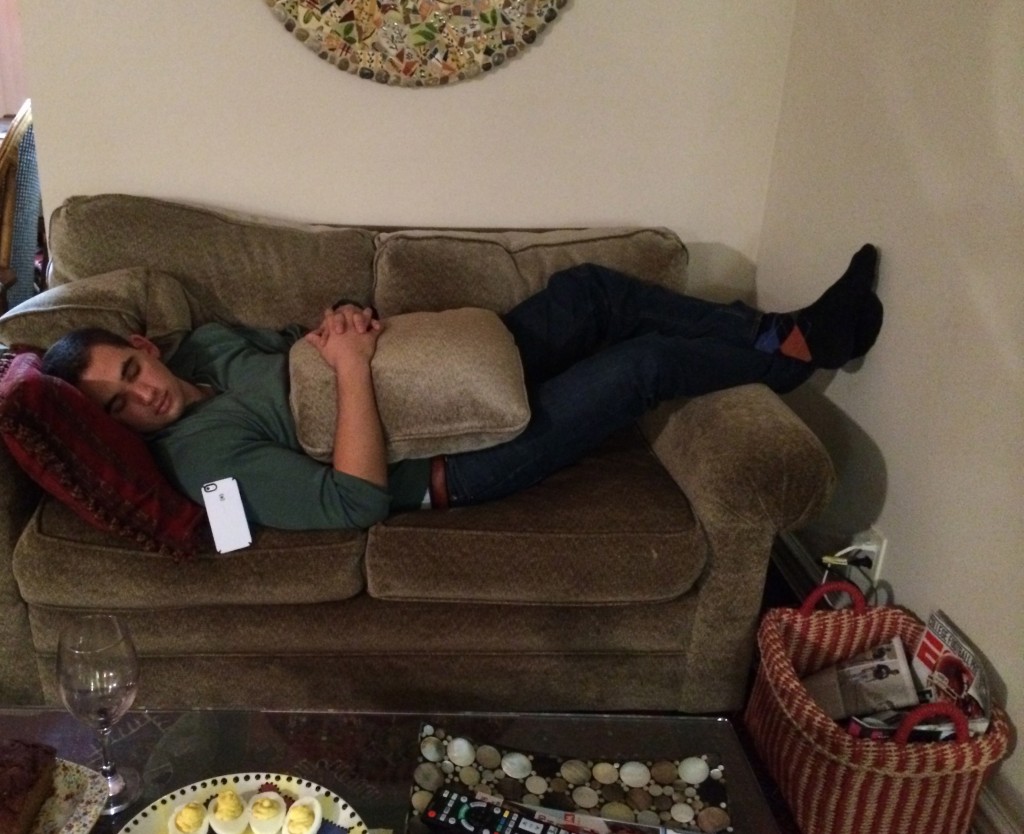 Daniel did his part flawlessly: eating.  Although it  was exhausting watching his sister who never stopped moving all day. 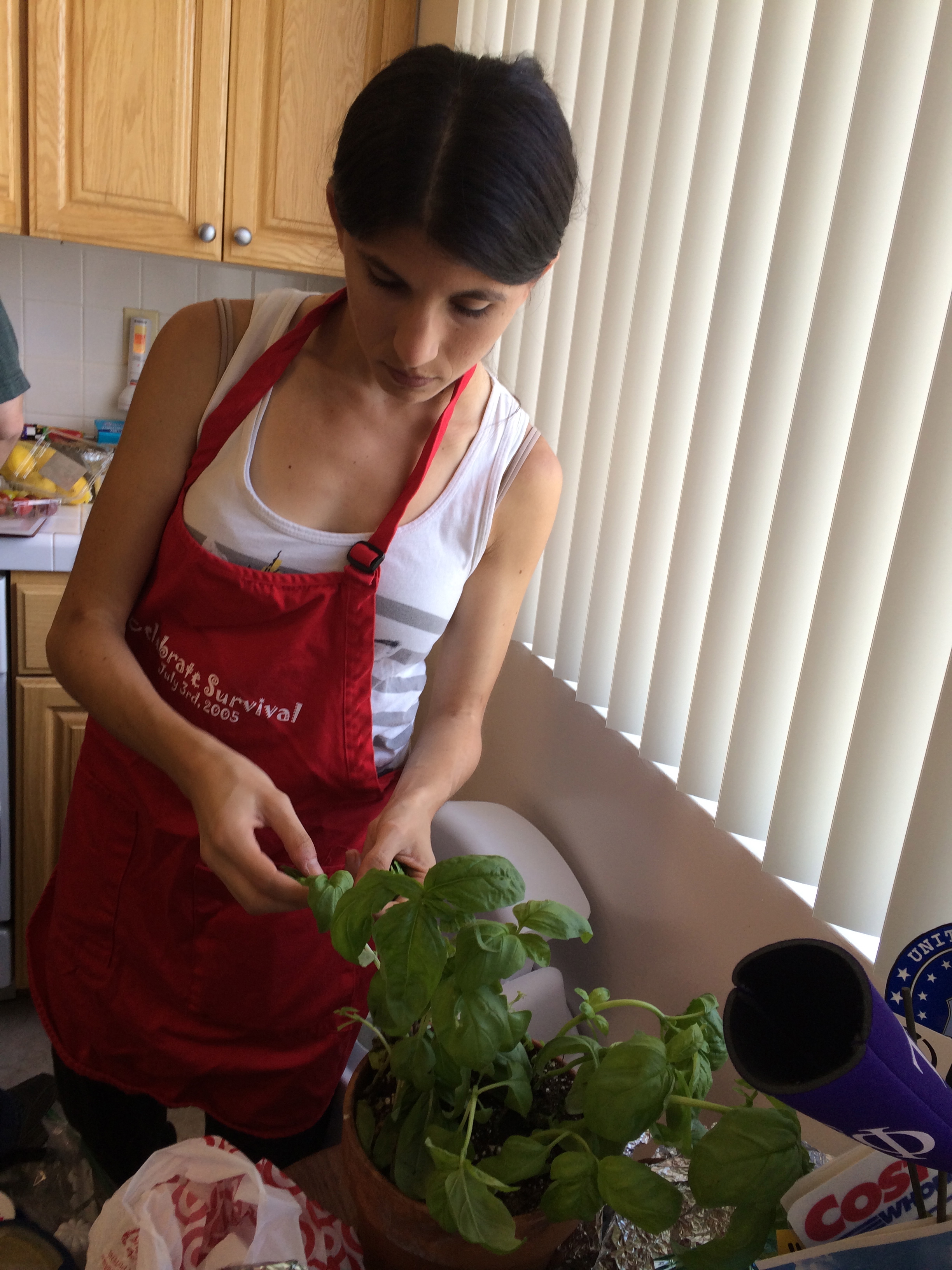 Most dishes had two versions—meat free, gluten free, carb free.  She roasted a real pumpkin for the pie. 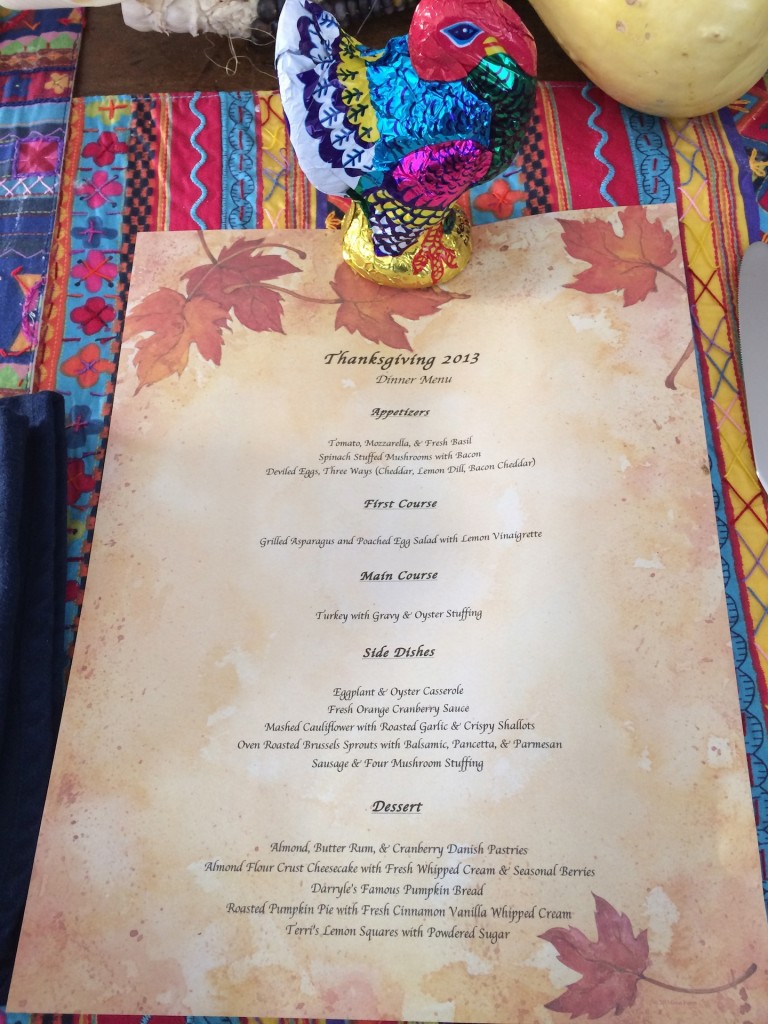 She even made a menu; and brought everyone See’s chocolate turkeys.

That reflects one thing she did learn from me: knowing no meal is complete without chocolate.

While the rest of us were in  a serious food coma, Alli managed to get all the leftovers into one refrigerator, a minor miracle in itself since I don’t have any Tupperware.

PS Before she turned into Martha Stewart and drove up to our house to do all the above, Alli got up at 5 a.m. and ran 18 miles.

Moral of the story:  Every parent thinks every child is a miracle.   And they are.