You are here: Home / Anything & Everything / Having said that….. 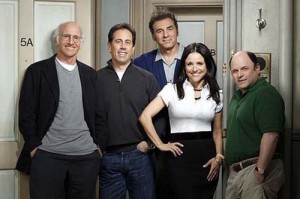 The cure for the soul isn’t always in your hands.  Sometimes it’s  in your funnybone.

Even though there are times when you have to look really hard to find it.

When her husband was deployed for 15 months in Iraq,  Alli had a secret weapon:  Jerry Seinfeld.  She went to bed with him every single night watching every single episode of every single season.

When I had cancer, a very wise person, who I was once married to, sent me cassettes containing old comedy routines he knew I loved…..Probably it’s not politically correct, but it’s true–to say that H was Mel Brooks’ manager, but  the tapes he sent were Woody Allen.

Laughter helped my sanity…helped me survive…helped me see the humor in my own situation, which is there even during the blackest times.   I always feel this is the reason the Jews, constantly struggling to survive as a people, continuously produce the best comedy, hands down.   Maybe nothing is a better survival tool than being able to see the comedy in your own life.

The joke is always on us; and since we can’t do anything about it, we might as well join in.

P.S.  Having said that…..the truth is:   The only real survival tool is chocolate.