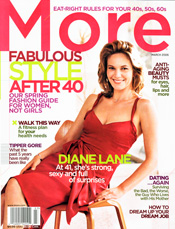 This is a  piece I wrote about my daughter Alli– published in MORE Magazine.

I finished college in 1971, a member of the first class of women to graduate from Yale.  I would not describe myself as overly ambitious–still, I like to be first, and I like to be best.  Of course I want the same for my children.  And I have to confess, by this stage of my life, I feel as if my kids have become one of the standards by which I am judged.  Pack them off to the Ivy League and you get an A-plus.

So when people ask where my 21-year-old daughter is going to college, I wish I could answer that she’s following in my footsteps.  But Alli’s not at Yale. She’s not in the Ivy League.  She’s not at UCLA, or USC, or even CSU.  My daughter took her 4.0 average from a top California prep school, and she went to UPS–United Parcel Service.

At her high school graduation, I had to congratulate all those other parents who had brilliantly aced the child-rearing final I had so clearly failed.  That summer, while my friends were attending parent orientations on college campuses, my daughter was moving into a shabby apartment and shipping boxes for other people’s children heading off to start their adult lives.

I came to dread running into the mothers of Alli’s former classmates.  With Kathy, Alli’s status came up in the third question, right after “How are you doing?” (busy) and “How’s your husband?” (traveling a lot).

I received a rundown on her relationship (over), her major (economics), her summer internship(amazing experience!) and her plans for grad school (Hopefully NYU or UCLA). Then she circled back…

“Did she ever go to college?”

Perky as possible.  “Not yet.”

Kathy gave me the look to which I have become accustomed–concern mixed with pity.

Some parents feel burdened by the college application process.  I actually looked forward to it.  For years I had interviewed prospective students for my alma mater, and I always welcomed any contact with academia.  I daydreamed about visiting beautiful campuses with Alli, and allowed myself to imagine what could be the end result.  Providence?  New Haven?  Princeton?

Then one afternoon during Alli’s sophomore year, as I was driving her home from field hockey practice, I suggested we visit the University of Pennsylvania during our annual Thanksgiving trip East to my family in Washington, D.C.

“You promised I could visit Jen.”

“Jen lives right outside Philadelphia.  We could stop first at Penn.”

She pouted.  “But then I lose time with Jen.”

My real agenda remained unspoken.  We can start with Penn, and soon I’ll take you to New Haven.

It was a textbook mother-daughter moment.  She had studied her subject for a lifetime and knew the course material inside out.

“It’s a waste of time.  And you can forget about me going to Yale.”

“There is no way I’m going to college on the East Coast.”

“How do you know if you haven’t even seen these places?”  I tried to keep my eyes on the road.

Yes, she did–back when she was six and thought she’d want to live with me forever.

But she had a point.  The East Coast idea had begun with me and remained there.  It had never taken root in her heart.  She loves California, and she hates to fly.  Okay, so now I knew.  I would not push her to apply.

By junior year, Alli was announcing her intention to take a year off before beginning college.  I was calm.  Teenagers are fickle, I thought.  Maybe she’ll change her mind.

But senior year came, and Alli had not abandoned her idea of taking time off.  Still, the college process continued.  She had the grades,the scores, the resume–and dutifully got her applications in by Thanksgiving.

That spring, as each fat envelope arrived, I allowed myself to hope.  I remember handing her the UCLA envelope, with a big smile.  I don’t remember her smiling back.

“What did she say about UCLA? ” her father wanted to know when he called me that night.  We had remained cordial after our divorce eight years earlier.  I had remarried and moved with the kids 300 miles away.  We usually spoke a few times a week; during this time we were speaking several times a day.  Neither of us was sleeping.

“She didn’t say anything.”

Actually, we only had until May 1.  Alli had all the time in the world.

One morning Alli appeared downstairs with a fistful of letters.

“What’s that?” I asked, in the most casual way I could possibly make myself sound.

“Just the letters to the schools, telling them I’m not going.”

“Uh-huh.” A quick wave and she escaped out the door.

What had I done wrong?  She was my first child, and I had been an overprotective mother.  Had I crippled her, was she afraid to venture out into the world alone?

She had attended the best playgroups, classes, schools, lessons.  if one program didn’t meet my expectations, I switched her into a better one.  Had I created a perfectionist who would never be satisfied?

She had always been self-motivated and intellectually precocious: from age two, when she taught herself to read, through high school, when she studied three languages.  Had I allowed her to burn out?

I had put parenting ahead of my television journalism career.  Now it seemed I had failed at the most important job I’d ever held.  Family and friends tried to comprehend and covered their shock with love and logic: “Colleges like kids who take a year off before entering.”  “It’s just typical teenage rebellion.  She’ll be bored with UPS in two weeks.”

I wanted to believe them.

Once she was living in the real world, I thought, Alli would learn her lesson.  Surely she would enter college by February.

So much for mother’s radar.  College is still waiting, and so am I.  And yet, life goes on–hers, and mine.

How many times do we say to our children: “Don’t do something just because the other kids do it…think for yourself.”  At 18, Alli was doing just that.  She had learned the lesson, and now it was my turn.

During the past three years I’ve watched in awe as my daughter developed life skills that I did not grasp until I was twice her age.

Making just over minimum wage, she has managed to live on her own, paying all her expenses, even buying a car.  She knows all about insurance, credit ratings, interest rates.  Before her friends left for college, Alli passed an exam, which she says was harder than the AP tests, and became a notary public(her first advanced degree, I tell friends).  She has no assigned books anymore, but she reads things that most of us don’t–such as the full text of every candidate’s statement and proposition on the California ballot.  She hasn’t taken a math class in three years, but she does her own taxes.

Alli will never get a bid from a sorority, but she got a promotion to manager of a UPS store, running a business by age 20.  She understands a lot about real life and about who she is.

Most important of all, she is infinitely happier, more confident, and more comfortable with herself than she was in high school–in fact, more than she has ever been.

Okay, it’s not New Haven.  But I have learned to be proud of my daughter.  I’ve discovered that parenting is far more difficult than anything I ever had to learn at Yale.  It’s a tutorial that never ends, but I’m hoping to speed up the learning curve with my other child, Daniel, a high school junior.  (I’m almost hesitant to write that he’s eagerly looking forward to college–I don’t want to jinx anything.)

Alli says that she will go to college when she decides what she wants to be–and she plans to pay for her own education.  With her characteristic independence, determination and maturity, I know she will do what she says.  Ultimately she will choose a career that is meaningful, challenging and right for her–and a school where she can get the education to make it happen.

Meanwhile, I still feel a stab of pain when I hear about someone else’s child who has just graduated from Yale, passed the bar, entered medical school or gotten an incredible job.  I have invested as much as any other mother has in her child.  But now I know I need to be invested less in her success on my terms, than in her happiness and well-being on her terms.  I owe her that.  And in return, she’s given me a precious gift: knowing she will always be able to take care of herself.