You are here: Home / Nostalgia / Roots and wings

We grew up across the street from each other in Miami Beach; in a neighborhood where you knew everyone.  The ages of our families lined up perfectly–she was friends with my younger sister; I was friends with her older sister; and our brothers were friends.  Once we grew out of playing in each other houses, we lost touch for decades.  Until the day I ran into her in the middle of Beverly Hills.  Now we were both mothers,  and discovered we were living a mile away from each other.

When your roots are deep as mine, and you live far away, it’s a gift having someone nearby with the same background, who knows where you come from, and who you were.  That’s enough to build a friendship in itself—Mary and I discovered more to share over the next few years–and mostly,  we laughed.

Especially when we found ourselves pregnant at the same time.

I was a week overdue when I called Mary one night.

“I saw the doctor today and he says I’m still not ready.  But I’m having pains and I can’t remember what labor feels like.”

She was the expert; pregnant with her fourth child, due a few weeks after me.  But when I described my pains, she wasn’t much help.

“I can’t remember either.  I’m sure it’s nothing;  I’m having some pains tonight, too.”

We laughed, shared our pain, and soon it was almost midnight.

“Talk to you in the morning.”

I called Mary the next morning from Cedars Sinai, to tell her I went to the hospital in the middle of the night and was now in labor.  I knew she’d laugh. Only she wasn’t home.   Turned out she had delivered her fourth child early that morning across town.  This time we tried NOT to laugh— it  hurt Mary’s stitches from her C-section.  But soon we had something else to share—my Daniel and her Rachel, born on the exact same day. 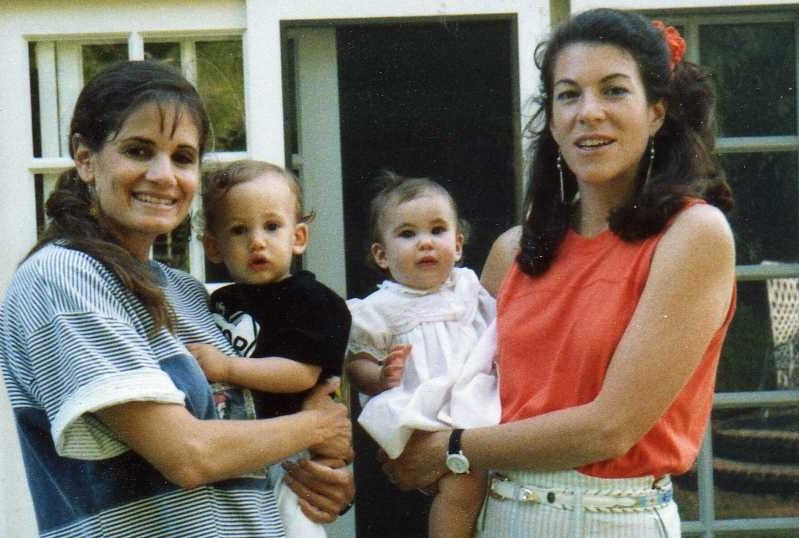 There’s one thing we don’t share.  Mary is organized, one of those capable people who can do anything and everything.  The kind of person you ask for an idea for your husband’s birthday—and not only does she have a great idea, she brings over everything you need to make a memorable, creative gift.

So it’s no surprise that when I got cancer, even though I had moved away to Carmel by then, Mary was there for me.  As the long months of treatment stretched out, and many people forgot,  Mary never did.  I would constantly get little notes and gifts, letting me know she was thinking of me.  And when my husband didn’t come down to Los Angeles for one of my medical visits,  Mary came to the hospital with photo albums, making me laugh and taking my mind off the chemo dripping into my veins.  I could never express or forget how much Mary meant at the time I needed it most.

I only wish I could see her more often. It’s been almost 10 years since I saw Mary; she emigrated to Israel with her husband and five kids.  Pretty ironic since I grew up in a kosher home with a father who was an observant Jew, while Mary was Jewish, but had little religious training or exposure until late in life.  She loves her new life in Israel and for years she’s been urging me to come and visit.  It never was the right time.  Until a few weeks ago– the universe intervened, things lined up, and tomorrow, I’m leaving for Israel.  Shalom.