You are here: Home / Popular Culture, Celebrities & Social Media / Jane Pauley: What’s not to like? 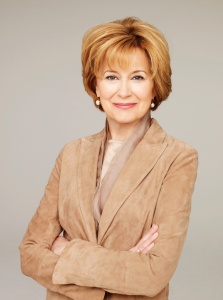 Everyone loves Jane Pauley.  And I get it.  But I have to confess, it would be so easy NOT to like her.

Author of two books, mother of three children,  television career of four decades,  Jane’s always seemed be one of those women who made it look possible, even easy to “have it all”.  Being sweet and self-effacing in addition to successful, Jane of course denies that she’s ever had it all.

She does admit to having lucky breaks and incredible opportunities.  One  reason it would be extra easy for me not to like her: I also was working in local TV news when Jane got plucked out of obscurity at age 25  to replace Barbara Walters on the Today Show.  And let’s not overlook the long stable marriage to Garry Trudeau, creator of Doonesbury.  And did I mention how fabulous she looks today at 64?

I still can’t dislike her. 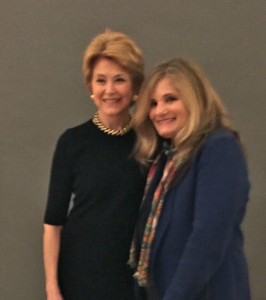 Never remotely attached to scandal or diva behavior after 40 years in the public eye, she spoke last night about reinvention and aging at the Distinguished Speaker Series in Pasadena; and I observed how she treated every person she encountered.

Jane Pauley is a class act.

Could be those solid Midwest values.  In fact, she credits her Midwest roots for not allowing fame to go to her head all these years.

Unlike most of her peers, Jane rarely asked her interview subjects the BIG question; the one everyone wanted to know about.

So how ironic that right off the bat during the Q and A after her speech on reinvention,  Jane got asked the BIG question everyone in the audience wanted to know: what are her thoughts on Brian Williams?

“Talk about reinvention!”  Jane’s immediate response got the biggest laugh of the night.  ( Add to the list that she’s also surprisingly FUNNY).

Jane says she’s had some setbacks, too.  Like back in high school when she failed to be chosen as a cheerleader, which opened the way to taking speech and debate and led to where she is today.  One setback she didn’t mention last night was being replaced as co-host of  the Today Show by Deborah Norville because NBC considered Jane too old….at 38.

How fitting that she’s focused on aging; and how the boomers have redefined it.  She’s both an expert and an example:  just last year Jane started a new job; after almost 40 years at NBC she’s now at the CBS Morning News.