When I was in college, way before he was linked with Mia Farrow or Soon-Yi, I thought Woody Allen was a genius.  He wrote erudite essays, did stand-up, and  had made his first few movies.    It was common knowledge that every Monday night in Manhattan,  he played the clarinet at Michael’s Pub.    So one night I came down with a few friends from New Haven to see him in person.

He did just that:  he played the clarinet.    Nothing else.  He didn’t introduce any songs.  He didn’t say one word to the audience.   He didn’t even make eye contact.

I didn’t need him to speak.  I was happy just to watch him up close in such an intimate setting.    I had my close encounter with Woody Allen—and I didn’t care if I ever saw him in person again.

If only I had quit while I was ahead.

Cut to 7 years later.  I’m a TV reporter in Miami.    I’m still wild about Woody.   Because I’m a fan,  my boss surprises me by sending me to New York on a movie junket, even though I’ve never reviewed a movie.  I’m wined and dined with a group of movie critics—and I get to see a preview of the upcoming Woody Allen movie: Annie Hall.

The weekend is like a dream.   I know it really happened— since there’s a picture to prove it. 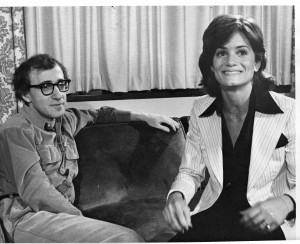 Woody seems to be shrinking away from me—and  he has good reason.     I have a high fever that day, but Woody doesn’t know that.    I’d like to blame drugs for my temporary insanity during our interview—only I’m not taking medication.

I’m an experienced reporter—-by this time,  I’ve met movie stars and two presidents.   Yet somehow,  sitting down with Woody, I’m intimidated. I’ve never been so nervous.  I’m unprepared, flustered, I ask dumb questions.  And that’s not even the bad part.

No, that comes at the end of our 5-minute interview—still on-camera—-when I ask Woody for a kiss.  He’s slightly stunned–but he gives me a peck on the cheek.

I have the interview in the can.   And it really IS a can— which the movie people hand me to take back to Miami.   I sit on the flight home,  panicked by the can on my lap, wondering if I will still have a career once the film in that can airs on TV.   I get off the plane and stand in Miami International Airport, holding the can over a trash container,  about to drop it in and invent a story that the film was lost by the airline.

I can that idea; the interview is broadcast, and nothing terrible happens.   I remain a fan of Woody Allen.    Very soon,  another Jewish filmmaker, Mel Brooks, introduces me to my future husband.    After a whirlwind romance, I marry Mel’s personal manager and move to Hollywood.   Cut to Act 3.

A few months after our marriage, my new husband and I are in New York.  One night we go out to dinner to meet some of his friends.  We’re led to our table at  Elaine’s.  As I sit down,  I turn to my right.   Sitting at the table, in the chair next to me is…..Woody Allen.

Of course my husband has no idea Woody and I have a past. I can’t get up and switch seats.  I try draping my hair to hide my face but it’s too short.    So I barely speak through the entire meal,  trying to ignore  Woody.   Only Woody is too courteous to ignore me;  he’s also too courteous to remind me of our previous encounter—- if he remembers it.

What irony.  If someone asked me to name my fantasy dinner partner, Woody would have been at the top of my list.  Now I have  two hours to get to know him.   Only I don’t .   I spend the evening—as much as humanly possible and socially acceptable— in the ladies’ room.

Finally the night is over.  This time, I don’t ask Woody for a kiss goodbye.

I still don’t know if he remembered the lunatic who kissed him.   By now,  3 decades later,  I’d be over the humiliation and able to  laugh about it.  Maybe.

I haven’t had a fourth encounter.   So no epiphany.   No happy ending.    And a little disappointing—-which by the way is my review of Woody’s  latest movie.