You are here: Home / Health and Cancer / Thanks Unexpected

I never signed up for this…..

I don’t often repeat those words though they sum up so much of what I blog about.  This includes the post I recently wrote about my ex-husband Howard, his illness, and his girlfriend Dina; and it also includes most of my life since Thanksgiving.

Before we’d even digested the turkey, Howard was admitted to the hospital– where we spent the weekend and the next week.  Though I managed to poke some fun at hospital gowns,  and I’m writing this with a lighter tone, it wasn’t funny —and no one has a better sense of humor than Howard.  Someone in so much pain makes it seem hard to find something to laugh about.

If you’ve ever spent much time in hospitals, you know how it is.  A little like Las Vegas where you lose all sense of time and routine. .  Outside of medical issues, I couldn’t focus on anything more productive than sending out text updates to friends and family.

Rarely is  a hospital a joyous place, unless you’re having a baby.  (Unless you’re delivering 10-pounders like I did.)  And though I can’t say this was a joyous experience,  in the end it turned out that there were reasons for giving thanks, after all.

Most of those are for people—including everyone who reached out via email, text, calls—many of whom read my post but have never met Howard.  When times are hard, these gestures mean a lot.  Though Dina still wears the wings, others have also been “angelic”.

Maybe because I could never imagine doing it myself, I’ve always been awed by people who work in medicine.  Especially nurses—many of them demonstrate devotion that goes so far beyond what you could call a “job.”

And Howard has an exceptional (and handsome) oncologist–who took on his case late in the game.  He would show up in the hospital at 6 a.m. and again as late as 9 p.m.–in between seeing patients in the office.  We can’t figure out when he sleeps.

Many patients express appreciation and admiration for their doctors.  For the first time ever, I saw it in reverse.  In a completely professional, completely undramatic, yet completely sincere way, the doctor expressed his admiration and appreciation for Howard—-for the amazing resilience and courage he’s shown during his ordeal.   It was just a few sentences; just a few minutes; but incredibly meaningful and full of humanity.  It’s a moment that’s  stayed with me—that I felt privileged and grateful to witness.

Most of all I’m grateful this current crisis was averted; Howard is now home; and so am I.

Every day in the hospital I’d look out the window and see the sun set on another difficult day;  I thought of  that driving the 5 hours to get back to Carmel.  So when I got here I didn’t even go home;  I went directly to the beach where I arrived just in time to see one more reason to be thankful. 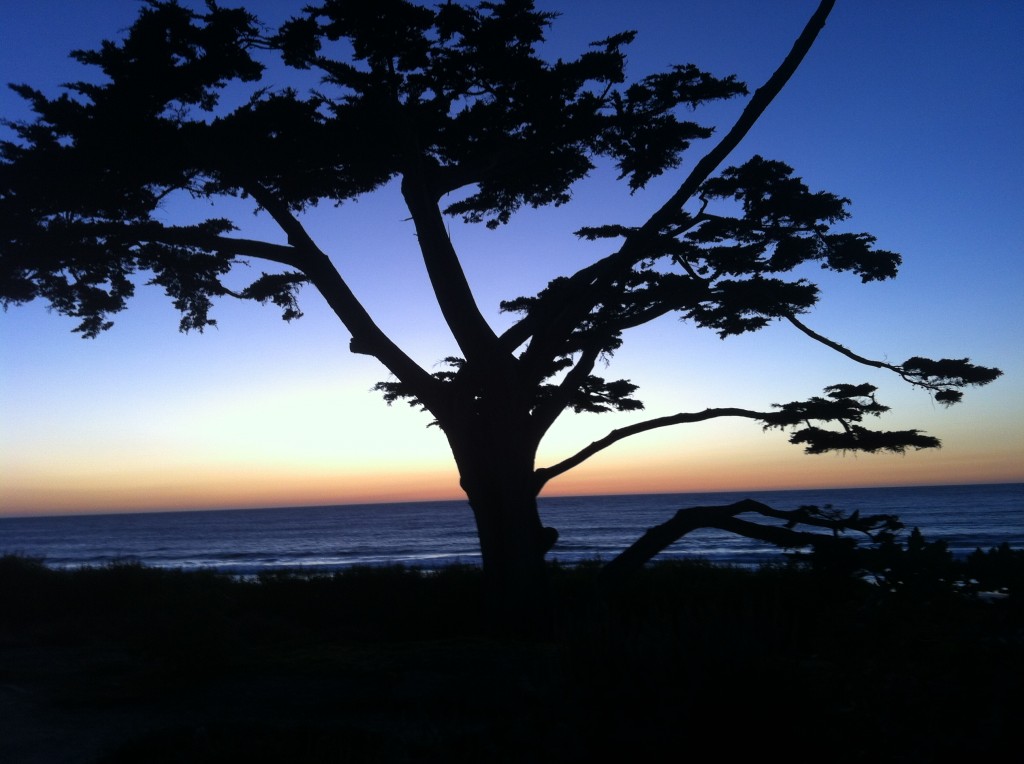