You are here: Home / Aging & Appearance / Memories like mine 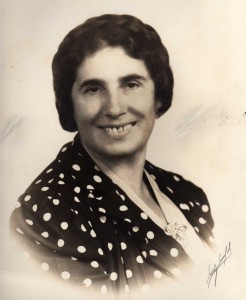 My father always told me I reminded him of his mother.  And I definitely inherited some obvious traits:  her coloring, her hair, and something  that set us apart from other Jewish mothers—-her inability to cook.

My grandmother’s talents lay outside the kitchen.  She was an intellectual, who could speak, read and write 7 languages.    My father honored her until the day she died,  taking us to visit her every single Sunday of my childhood.

I remember very little about the visits to her home, where she would watch us– climbing trees in the backyard.   I remember far more about the later visits, when we would watch her– wearing a diaper, being fed by an attendant in the nursing home,  no longer able to speak even one of the 7 languages.

When I had my own children, we lived 3000 miles from my father, so we didn’t visit him on Sundays.  And my kids weren’t around to closely watch his decline from the same disease–which ultimately claimed his life and both of his brothers’, like their mother’s.

But I know my children’s memories include very little of the  intelligent, indefatigable  grandfather who flew across the country and played baseball with them in the backyard.  They remember far more about the dazed and docile man they saw when we visited the east coast, who looked at them with vacant eyes wondering who we were.

I’ve always assumed that besides the coloring and the hair, I would inherit one last thing from my grandmother: Alzheimer’s.

This family history explains why I wanted to participate in a conference call with Maria Shriver, who is watching her own father decline; and helped produce an HBO series on Alzheimer’s.   On the call, she expressed her passion and commitment to help raise awareness of this disease that affects not only individuals, but also families.

Currently over 5 million Americans are afflicted.    And in the years to come, millions more lives will be touched—as an estimated 10 million baby boomers are expected to develop Alzheimer’s.

Due to those numbers and my experience–I will be watching the entire HBO series, even though the first episode tonight was really, really hard for me to watch.   I’m hoping many other people will watch, too—especially since this is a  multi-media event and you don’t need to have HBO in order to watch.    I’m hoping increased awareness and focus will help turn the high hopes for a cure into a reality.

So my grandchildren– and yours– will not have to remember their parents and grandparents as I remember mine.  So we can eradicate this disease –which in its cruel course towards the end of life– robs its victims not only of their memories, but ours.