You are here: Home / Anything & Everything / Corny Island

I have a feeling I’m not in Kansas anymore. Of course, I never was. I made it to Iowa after my plane was delayed getting out of Washington, DC. I had to sprint (still less than 8 mph) to make my connection at O’Hare for Cedar Rapids. For those of  you who know Iowa geography like the back of your foot, Cedar Rapids is in the Eastern part of the state. After meeting the team  last night, we met this morning to drive to Council Bluffs, which is on the Western border. The ride is designed to start at the Missouri River and end at the Mississippi River, at Burlington, Iowa.

The team met to load the truck and van to begin our trek Westward. 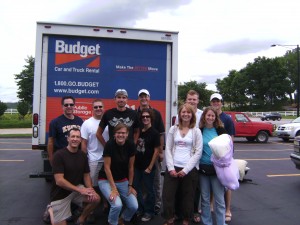 Not all of the team members are pictured.

While I have been to Iowa City for CFCMD Advisory Board Meetings, I have not seen much of the state. During our drive,  I saw many windmills and learned from my teammate, and de-facto honcho of the effort, Mitch Beckman, that Iowa is second only to Texas in windpower generation. 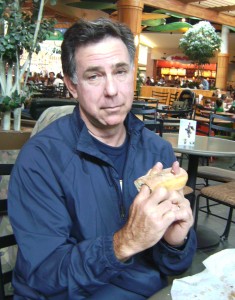 Mitch also mentioned that Iowa grows some corn. LOTS of corn. The conversation was good, but the scenery was a little monotonous. At our lunch break, I was forced to entertain myself by making a roll finger puppet.

By the way, we wouldn’t be on this ride if it weren’t for Mitch. When I sat next to Mitch after a CFCMD meeting at Boston Garden in late January, I leaned over to him and said, “I would be willing to try to do a RAGBRAI fundraiser for the CFCMD if you guarantee me that I won’t have to sleep on the ground.” Mitch, who is only slightly more positive than the Kenneth character on “30 Rock,” said, “Of course” or something like that. There was alcohol involved.

Here is a picture of Mitch and me in front of my tent. 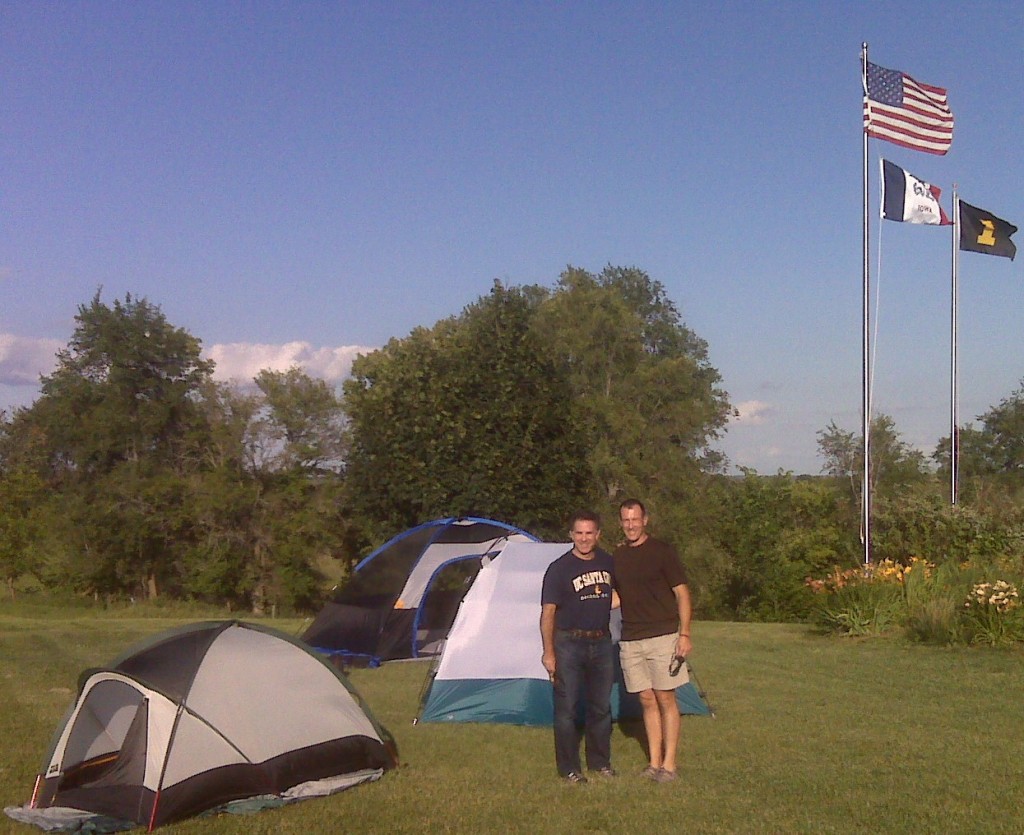 Mitch didn’t lie exactly.  Overpromise, perhaps. And technically I will be on an air mattress. Seriously, Mitch is the one guy you want in a foxhole with you.  He will get the job done no matter what.

Most of the RAGBRAI riders stay in what amounts to big tent  cities, near schools and other venues with large parking lots. Their showers are spartan, at best. 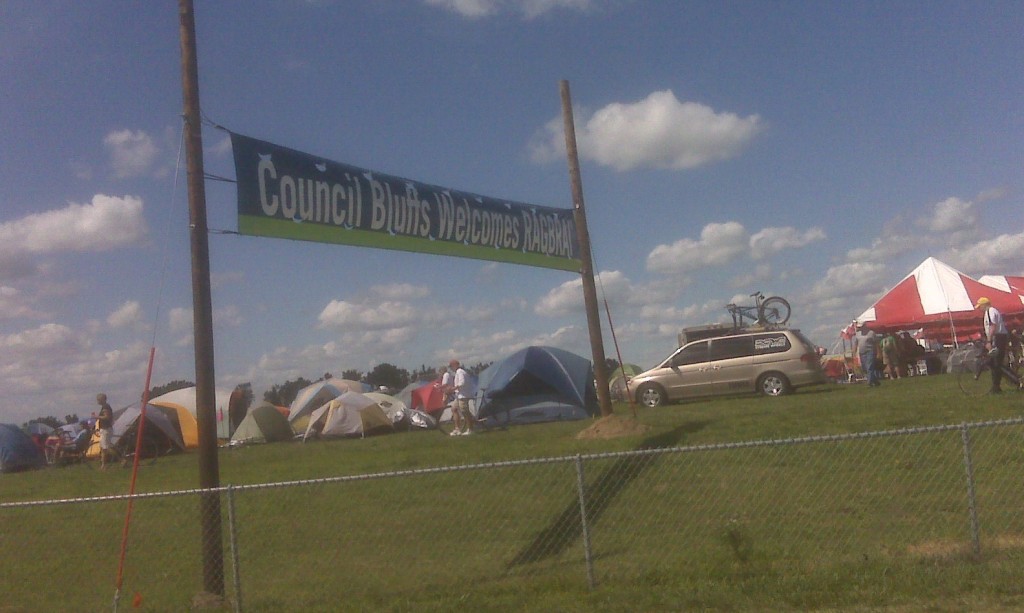 Our CFCMD team is incredibly lucky, however.   University of Iowa supporters have kindly allowed our team to camp out in their yards, use their showers and bathrooms and otherwise opened their homes to us. Today we arrived at the home of Alan and Cordie  Fischer. The setting is beautiful. 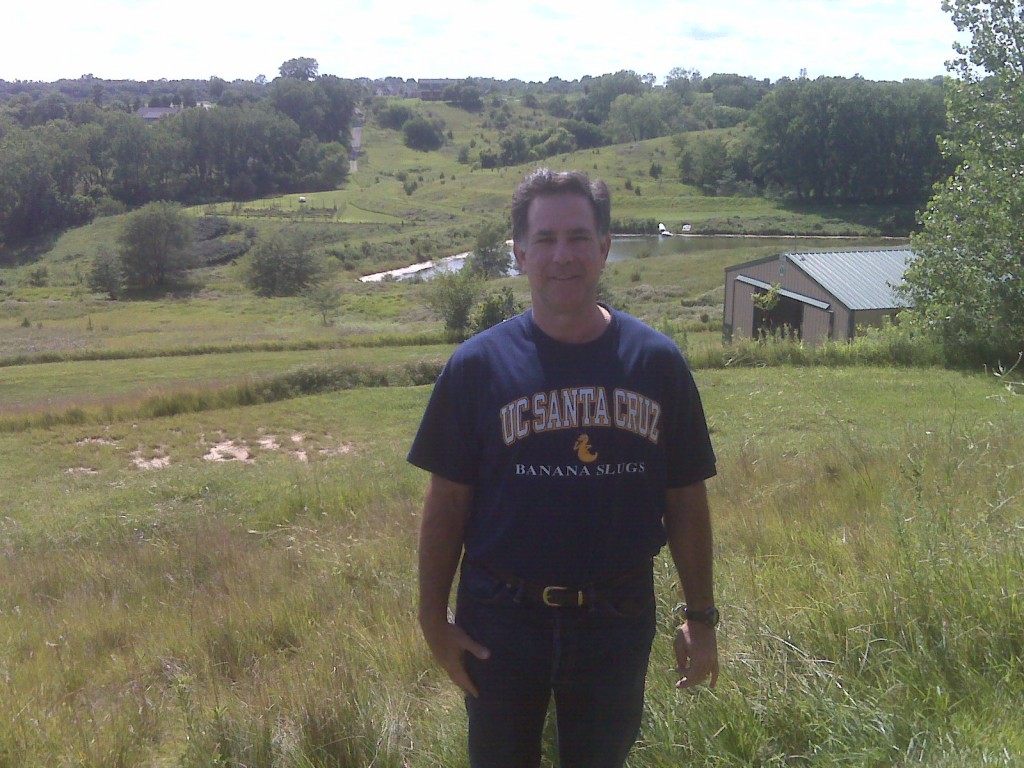 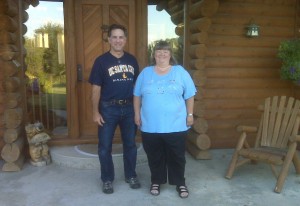 And the hospitality is even better. Cordie has been incredibly gracious. -We barbequed on her porch overlooking the gorgeous setting.

Oh, Cordie just mentioned that they have an extra bed, if I would like to use it.   Mitch is redeemed—but tonight he’s sleeping in the foxhole without me.   I love Iowa.