You are here: Home / Anything & Everything / The Hip Bone is Connected to the Pork Chop

A couple of days ago, I decided that it wasn’t a good idea to mention each of the host families, in order to protect the innocent. I will break my rule one time to mention that if I move to Indianola, Iowa, I hope I get adopted by Elodie and Sandy Opstad.

Before describing today’s events, such as they were, I thought I would introduce some of the team members. One of the fascinating aspects of the team is how it came together. Not everyone  works for the University of Iowa or its Carver Family Center for Macular Degeneration.  The team grew organically–kind of like compost, except better smelling (in the mornings only). 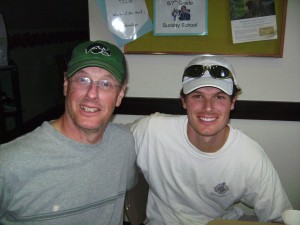 Val Sheffield is one of the senior scientists at the CFCMD.  He is too modest to say this, but he is one of the leading scientists in his field (and it is not a corn field), a genuinely nice guy, almost my age and a very strong cyclist. I hate him.  Just kidding. His son, Abe, is just like him, an underachiever who managed to somehow be in an MD/Phd program. His one weakness: he can’t hold his pie. 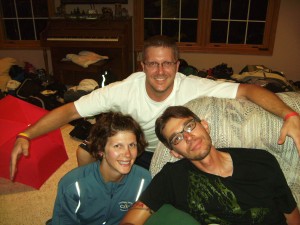 Tyson Kinnick is a post-doctoral research scholar at the CFCMD and an experienced cyclist. I’ve managed to teach him a lot about cycling in the four short days we have been together. Tyson is from Arizona, and invited his cycling friend and eye disease researcher from Tucson, Brett Stanton, who is joined by Lynn, who is a nurse. Brett and Lynn were in the SWILS picture .

Remember Mitch? We’re sick of him in the blogosphere aren’t we? Besides, the brains behind Mitch  is Shannon Thomas, who is in the middle of the picture below. 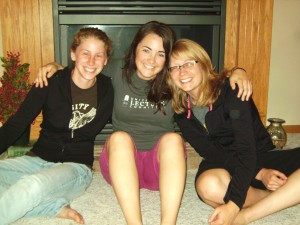 Shannon works for Mitch, and is one of the key organizers of the ride. I have to be nice to her for a few more days, or I will be back in a tent instantaneously. Her friend on the right side of the picture is Sherami (rhymes with Jeremy) Hinders who works for the campus Christian Fellowship. Sherami is Shannon’s roommate. She is appalled by me, quite justifiably.  On the other side of the picture is Sarah (rhymes with Sarah), who works with Sherami. Sarah is appalled by Sherami. Not really. I am just trying to shake up the team dynamics so we can get our own reality TV show. 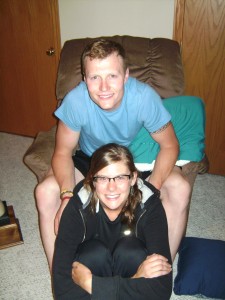 Eric and Erin are the last people tonight. Erin Butler is a friend of Shannon, and is a very good cyclist. For some reason, she invited her boyfriend Eric Bockelman, who is not only a terrific cyclist but makes me laugh about every other utterance. I don’t know what she sees in him.

There are some other team members who will be introduced  in a later blog.

Bored yet? You should be. The day was even more boring. Perfect, sunny day. No blowouts. “Only” about 48 miles, with under 3,000 feet of climbing. My legs felt better as the day went along.

We are staying indoors tonight in an eye clinic. It may not sound like much, but it is a good spot. We feel lucky again.

I reached the 20 pie threshold tonight, thanks once again to my team. They want me to continue my pie quest. I’ll think about it. One thing I do know. I will not have a Farm Boys breakfast burrito tomorrow. Four days in a row is enough. Even for me.

I forgot to mention one story from the ride over to Council Bluffs. We stopped at a fast food place and I ordered the special sandwich/salad combo, which came with a drink. I wasn’t paying close attention to the transaction, so when I noticed an empty plastic cup in front of the register, I figured people don’t tip much in Iowa. I thought I would show my generosity by putting my change in the cup. When I did that, the girl at the counter laughed and said, “Mister, that cup is for your pop.” I slinked over to the drink dispenser trying discreetly to empty the change before filling up my plastic cup.  Ok. So, maybe those lawyers from Washington, DC aren’t so smart. At least she didn’t call ME pop.

Chocolate  (the worst pie of the trip. Sacrilege!)