You are here: Home / Anything & Everything / Bears watching

About a month ago I was in Aspen—raving about how great the food was.  Well, it turns out I’m not the only one who noticed how well you can eat there.

Maybe you saw this story I just read —about how the bears are coming down from the mountains into town, scrounging around for food. 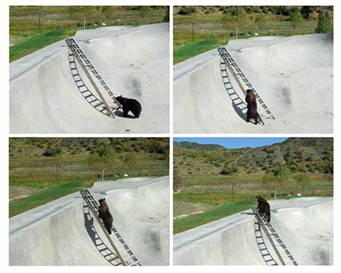 This one got trapped in a skateboard park and they had to lower a ladder down so he could climb out.

They’re overturning dumpsters and opening garbage cans, looking for anything to eat.  Even downtown.  Right in broad daylight.

I heard  about this while in Aspen, from people who were hiking and saw a bear cross their path.

The danger is that they’ve lost their fear of people; I think they don’t come too close unless you have food.

The article did destroy the common misconception about bears and honey.  One bear broke into a house and rummaged around the kitchen, bypassing jars of honey in favor of something he liked better—-candy. 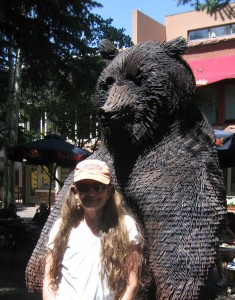 Which explains what happened to me in Aspen: I had chocolate in my purse.