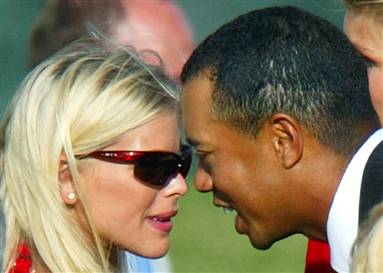 It’s not a Toyota that got hit; it’s a Tiger.  This is a billion dollar vehicle—even if it’s just dented, it’s impossible not to gawk.

Suddenly I’m pouncing on the sports news the minute it hits.  And the news is juicy, just the way tigers prefer their prey.

You don’t need to be a rocket scientist to figure out what probably happened here.  Yet the details of a celebrity complication would not be drawing in someone like me.    This would be just another star playing a cat–and-mouse game with the press and the police.   Though a Tiger is a BIG cat,  that’s not the aspect of this story that whets my appetite.

It’s the image of Tiger with his uncanny control on the golf course—control that even a non-golfer like me can appreciate.   In a strange way, at its core,  this story is almost satisfying to mere mortals—to see the ultimate control freak lose control.  Big time.  And I don’t mean control of the car.

Of course this is only personal speculation– but it’s ironic to see the unraveling of the things Tiger  CAN”T control:  including his own sex drive,  Gloria Allred, and the fury of a woman scorned.
Most importantly, he can’t  control the appetite of the public.

Which leads to the biggest irony of all:
This is a feeding frenzy with the tables turned.   It’s the tiger who’s the raw meat for the rest of us.