You are here: Home / Health and Cancer / The Possibility of Everything 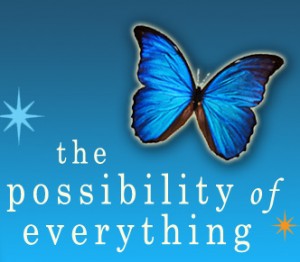 …..“an otherwise mainstream mother and wife….transformed from a person who believed only in the visible and the proven to someone open to the idea of larger, unseen forces.”

Those words describe Hope Edelman, author of a new book,  The Possibility of Everything; but they also could have described me—another skeptical Jewish girl from the east coast.

Maybe it happens after living so many years in California…… where sometimes I can forget how many people remain skeptical about the traditional/alternative world of healing—and people like Edelman, a young mother who turned to native healers, folk remedies, and plants to help her young daughter on a week-long vacation in Belize— that turned into a deeper journey on a spiritual level.

Just as Edelman is different, ten years after her journey, so am I.

It took  an entire book to describe her experience;  this one blog post isn’t going to do it for me.   Where would I even start?

Right after I got cancer a friend called; someone who had known me for years, and knew my East coast mindset.  She told me about a woman she called “a healer”…..and she wanted to convince me to see her.

She didn’t need to twist my arm.

When your options close down, it’s amazing how your mind can open up.

I would have tried anything and everything .  And I did.   There’s too much to describe here, or now.   I know much less than Hope Edelman and so many others.   But  I believe I’m here today because I took a leap of faith….to try what I did…and still do….to heal.

In the years since my own journey, the balance has shifted in this country—maybe one of the benefits of a flattening world.  For instance, recently  a scientific journal published some promising research studying a “folk remedy”  used in Central America and Asia…. which shows potential for preventing or curing breast cancer.:  Bitter Melon.

You gotta love the irony:   Bitter— for cancer….Melon for breast.

Then again far stranger things happen.    There’s so much about our bodies and our minds that we don’t understand.   So much to see if we’re willing to open our eyes.   I’m willing to believe in The Possibility of Everything.  Are you?