You are here: Home / Health and Cancer / A team sport: the science of support

Science was my least favorite school subject—all I took away from science classes was a lifelong friendship with Sue, my 10th grade Biology lab partner — who shared squeamishness for the class and making fun of the teacher.   Amazingly, that was the last science class I ever took….unless you count Rocks for Jocks (i.e. Geology) as a college freshman.    Hard to believe that I graduated from Yale without ever taking Chemistry or Physics—even in high school.  Not that I’m proud of this, or happy about it.

As a cancer activist,  I now have a major interest in science and research.   Since high school Bio, I’m slightly more informed, but way over my depth.   Many times in conversations with doctors and scientists, I don’t even understand lots of the words. This gap in my education hangs there,  like a black hole in space.

This post is intended to honor of someone who does understand science—including black holes in space.   Susan Niebur is a young mother and astrophysicist (whose blogger alias is  WhyMommy); she is a fellow member of the American Cancer Society’s Blogger Council and one of my inspirations in the online cancer community. As a show of support and love while she begins her battle against a recurrence of inflammatory breast cancer…today some of Susan’s friends and admirers in the blog-world are posting about her world—the world of science. 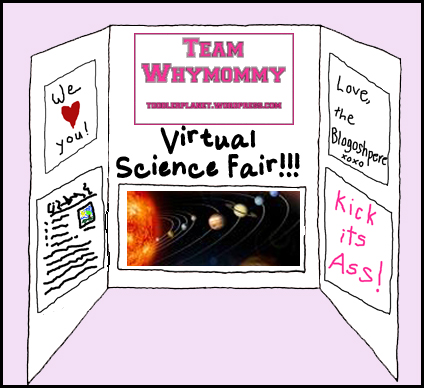 Team WhyMommy Virtual Science Fair—- is  more my speed than a real science fair……not that I have anything intelligent to offer about science ….However,   timing is everything………and last week at the Yale Women’s conference, I had an opportunity to hear an extraordinary woman scientist, Dr. Carolyn Mazure, speak about her fascinating work.

My words won’t do justice to what I heard; but here’s the central point:  the scientific studies that form the basis for what we know and practice as modern medicine, were based exclusively on studying male subjects.  Women were not included as participants in clinical research and, even when women were included, gender differences in outcomes were not examined.  Still, even now, many animal studies are conducted using only male animals.

Information that symtoms of heart attacks can be completely different in women…..is an example of recent learning.  In the mid-1980’s did the National Institutes of Health began to fill  this enormous gap in our base of medical knowledge when it adopted its policy to include women into clinical studies….this was  passed into law by Congress in 1993.

Much of what we are learning—and will know in the future—will be due to women and programs like the one at Yale, designed to promote more research.    Like my deficiency in science, this area remains a large black hole regarding our understanding of women’s health–and it affects all of us.   We all owe a debt of gratitude to Dr. Mazure and others who are not only advancing science, but advancing our approach to it.

An inspiring woman of science—like Susan Niebur: WhyMommy, I am proud to be on your  team.