You are here: Home / Health and Cancer / Why I Choose You

I never signed up for this…..I’ve said that so often,  it’s the title of my blog.  Only this time,  I did sign up for this.  And here’s why:

Did you ever have a moment when you can’t believe the world  is still spinning….because your world has turned upside down?

My son’s 7th birthday was the last day of life as we knew it— life as it was supposed to be.

I was a typical mom, holding all the strings that tie the family together….. absorbed in my kids and work and everything else on my  overflowing plate.  Like most busy moms, the last thing I had time for was me.   Until suddenly that’s all I was thinking about. 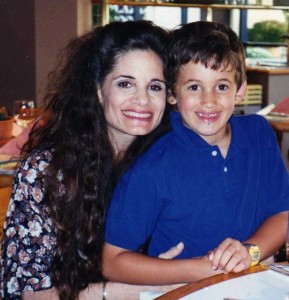 These pictures were taken before I  told my kids about the journey we were about to begin.   It was the day before I would lose my breast to a mastectomy and lose my long hair to chemotherapy.

Smiling on this day was the hardest thing I had ever done.

Cancer is the wake up call no one wants.  It forced me to do something I’d never done: to put myself and my health as my top priority.

It wasn’t a choice— it was an imperative. 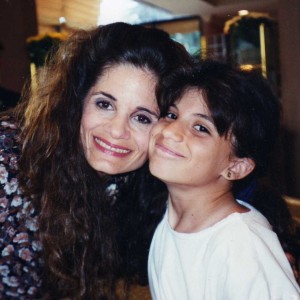 The kids might not remember that I suddenly pulled the plug on fast food for the family;  that I went on a stringent diet, cutting out sugar and fat and  even my beloved chocolate; that I worked out so faithfully –even during cancer treatment I was in the best shape of my life;  that I found ways to relax and manage my enormous amount of stress; that I desperately searched out every preventive measure against cancer that I could find.

I was lucky.  The little boy who was just turning 7 is now in college, studying abroad in Buenos Aires.  When I visited him recently, I got a little window into his life— and vice versa.    Spending  time together made it clear—at least to one of us—- something was wrong with this picture.

When mealtime would roll around, Daniel would roll his eyes. “Mom!  You eat too many sweets!”

Me:  “Is it my fault they serve dulce de leche at breakfast, lunch and dinner?”

I knew about Argentine beef, of course.  But until I got there, I didn’t realize there’s another staple of the Argentine diet : dulce de leche. Delicious….but if you’re health conscious,  equally dangerous.  And I’m a person who doesn’t like to use the  words “sweets” and “moderation” in the same sentence.

I’m a cancer activist; I know far more than most people  about cancer prevention and a healthy lifestyle.  But following through is a whole different story.   And over the years since my diagnosis, I’ve started to slack off.

Meanwhile,  my kids turned into the Food Police. Living on his own, Daniel eats the healthy diet I used to nag him about.    Now he’s nagging me-— to practice what I preach.

As I was leaving to return home,  Daniel said to me, “Mom, I want you to promise me you’ll take better care of yourself.”

His request turned out to be a Mother’s Day gift  from thousands of miles away.

Because waiting for me at home was an email message from the American Cancer Society–where I’m a member of the Blogger Advisory Council. That’s when I learned that the ACS is asking women to commit to make their own health a priority…. and  inviting me to participate as one of the featured bloggers.

Talk about timing.   The  sign from the universe couldn’t be more clear.  I signed up on the spot.

The way I look at it, Daniel was speaking for many others beyond himself.   Though all women won’t get such a direct request—there is someone in every woman’s life who would appreciate your commitment to your health.    I hope you’ll think of them, think of this program as a gift to yourself, and Choose You.