You are here: Home / Health and Cancer / Creating a world with more birthdays

3 days in a row I’m blogging about birthdays and it’s not even close to my birthday.  Besides birthdays, there’s another theme I’ve been stuck on lately —the circle of life.  Today both of those themes connected in an amazing way.

This starts way back in the 70’s, when I was working  in Miami television and cancer was still a taboo subject, discussed in whispers.   I didn’t even know yet that cancer had touched my own life,  and caused my mother’s death at 41.

The American Cancer Society was working to bring cancer out of the shadows, and one way was through breast cancer awareness.  Like most women, I knew almost nothing about it.  When the Cancer Society contacted Montage, the magazine show I worked for, I ended up as the producer, writer and reporter for a documentary devoted to breast cancer.

I connnected with some amazing survivors—brave and inspiring women of all ages who taught me about the disease and about facing reality in ways I was not even capable of appreciating.    I have a copy of the show somewhere but even decades later, I don’t need to watch it to remember the most memorable incident.

In an interview, one of the survivors described her role as a Reach to Recovery volunteer—both a guide and a  role model.  She would visit women in their hospital rooms just after their mastectomy (lumpectomies weren’t done yet)  and she said every new breast cancer patient followed the same exact pattern:  “She’ll be in shock from fear and the whole experience.  I walk into her room and I tell her I’m a survivor and the first thing that happens—every single time—is that her eyes will automatically move from my eyes to my chest—and back after she checks me out.”

That’s exactly what happened, when we filmed her visit with  a woman who had just had her mastectomy the day before.

Betty Ford’s brave decision to announce her own cancer battle had not yet begun to shine a light on this disease.    So our documentary was a breakthrough — not just for television, but for me personally— after the show won a national award from Women in Communications.

20 years later, the circle of life started to come around—-when I got breast cancer myself.  I found that funny–in a very black way—after all my work with breast cancer.  And now there’s more.

Out of the blue, all these years later, the American Cancer Society entered my life again.   Recently  I was invited to join an Advisory Council formed of women bloggers with an interest in health and cancer, who will work with the organization on using social media to raise awareness and save lives.

I was hesitant to commit.   I agreed that I would join the first conference call before deciding whether to become part of the group—meanwhile I’m busy like we all are, and I didn’t give it a second thought.

So last night I blog about  how my own birthday is more meaningful since I’ve had cancer.  And 10 hours after that—today— is the first conference call with the American Cancer Society.  We’re hearing about the direction of their new campaign…. and it’s all about birthdays: 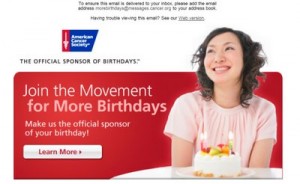 Create a world with more birthdays.   Official sponsor of birthdays.

It’s a wonderful message—and you don’t have to be a cancer survivor to be involved.  Check out their site and see what I mean.

As for me, I’m taking this incident as a nudge, a shove,  a personal message from the universe— with an assist from the American Cancer Society—  letting me know that I am meant to be doing this.   Not just as a way to add meaning to my own birthday but to add something to the lives of others.   And once again—to find another way—to make the circle of life feel complete.