As if it isn’t hard enough when a woman starts feeling over the hill....

Here’s the latest kid to be labelled a style setter—Sasha Obama. 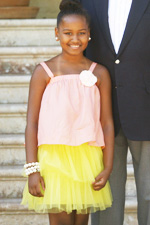 She’s following in the fashion footsteps of  Madonna’s daughter Lola— who has her own clothing line….

Will Smith’s daughter Willow— who has her own stylist—

and Suri Cruise–wearing the latest styles before she stopped wearing diapers.

Fashion can be one of those tricky areas between mothers and daughters—creating bonds or breaks or everything in between.

Mothers of boys only—you have no idea how lucky you are.

I feel really lucky  I was spared dealing with a 6 year old wanting to dress like a sexpot….or like Shiloh. 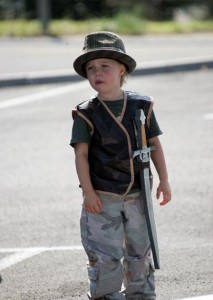 Fortunately many girls are as fickle about fashion as they are about everything else.

By 18 months my daughter went through a period where she refused to wear any article of clothing unless it was turquoise.   A few years later I realized this was  a declaration of will rather than a fashion statement—when she started wearing baggy t-shirts tucked into elastic waist sweatpants.

Don’t even ask what it was like buying shoes when she spent six years refusing to wear anything leather-— now she’s morphed into a 20-something who’s addicted to Uggs.

So my feeling  is generally to let your kids do whatever rocks their boat, even if it rocks yours.   Personal style is….personal.

Which holds true at the other end of the spectrum.

As fashionistas get younger, their moms are going in the opposite direction.  And yet people are still making up ridiculous rules about what NOT to wear if you’re over 50— no tank tops, short skirts or bootleg jeans.

Oy.  As someone who gets most of my clothes lately in age-inappropriate Anthropologie, my attitude  is like most of my tops —very loose.