You are here: Home / Nostalgia / Readers Without Borders 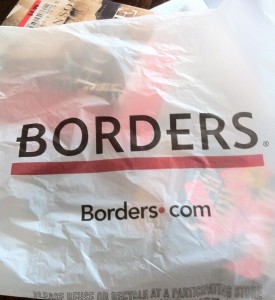 I don’t just feel sad; I feel like an accomplice in the murder.

Since I’m a Jewish mother, and we specialize in guilt— I can’t help feeling guilty about taking part in killing bookstores.
What makes it worse is that technically this is a crime of passion—since there are few things I love more than books.

Even before the demise of Borders, there was guilt–for patronizing it after our legendary local bookstore was an early victim of the mass murder of independent bookstores-—one of many examples of the movie You’ve Got Mail.

And though I vowed to remain true to the printed page, like everyone else, I caved– to the lure of instant electronic gratification. Now I can’t imagine life —or books—without a Kindle or iPad.
But I also can’t imagine life without a bookstore in the area.

Sharing them with my children was one of the joys of being a parent. My daughter glommed onto books from the time she could hold one in her tiny hands; and was a voracious and early reader. Books were always at the top of her gift list; and she would choose a visit to a bookstore over going to the park.

Once she was old enough, bookstores became her domain. We’d enter together and she’d rush to the kids’ section; choose a book from the shelves, and flop on the floor in one of the aisles. No matter how long I spent browsing, I’d come back and find that she hadn’t moved from the spot where I left her; and would plead to finish the book (more guilt that she read more books in the store than I bought.)

I told Alli about my childhood version of the bookstore—the BookMobile. It was a portable library on wheels that would come to our neighborhood once a week, and station itself by the park a few blocks from my home. I’d ride my bike over and browse the shelves carefully–we were only allowed to check out two books. I don’t think I ever missed a week–or paid a fine.

I don’t know if Bookmobiles still exist anywhere; to my daughter it was a historical artifact as remote from her life as a covered wagon was for me.

Meanwhile tonight my husband and I went to Borders. The best deals haven’t even started; but as we picked through the bins and loaded up—I felt the full force of guilt.  And something else—a touch of nostalgia—to be buying “real” books.

How quickly things change. I have a feeling someday Alli will be telling her kids that she remembers when books were made of paper and sold in stores, and it will seem as remote as the Bookmobile.

Article first published as Readers Without Borders on Technorati.