You are here: Home / Popular Culture, Celebrities & Social Media / Miss Representation: When will women wise up and rise up? 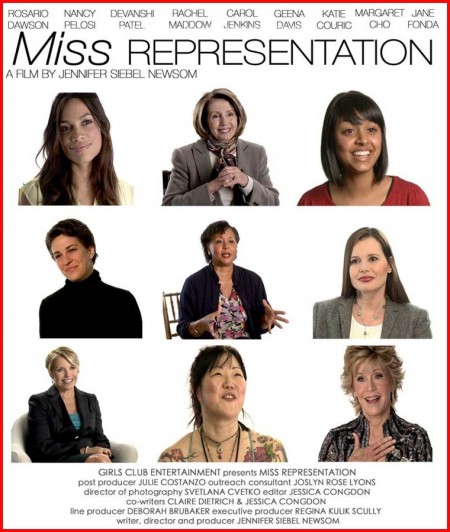 That’s how I felt watching the trailer for the upcoming film Miss Representation—about the depiction of women in the media.  (If you haven’t seen it yet, click and watch right this minute; then read the rest of this. )

Not hard to see why it strikes a chord; why women are sending it flying around Facebook.

Beautifully done, including interviews with an amazing array of accomplished women, to me what stands out is the feeling of deja vu.  And not just because Gloria Steinem is interviewed.

What she helped to lead was called the women’s “movement”.  The movie trailer makes you wonder whether we’ve really moved forward –or back.

In a poignant way, it  illustrates much of what we’ve gained—and lost.  And it’s hard not to see the irony in the phrase women’s “liberation”—from the days when women were freed from girdles and burned their bras—-to today when women are stuffed in Spanx and silicone.

Not to mention how confusing the messages are for our daughters. And our sons.

I would venture to guess that some of the same women posting the trailer on Facebook are getting regular botox injections and buying their toddlers sexy costumes for Halloween.

Women—at least, most of us– have always wanted to look beautiful, young and sexy.  And there’s nothing wrong with that.  The problem is a matter of priority and degree.  The sexualization of women is so pervasive and insidious that it’s become grotesque—and it practically extends from birth to death.

Today the tiny female hand still grasping a baby bottle might be already wearing nail polish.  And with women getting cosmetic surgery into their 80’s, beauty products will have to be pried out of our cold dead hands.

It’s typical– even trendy –to blame the media.  Though women are still under-represented at the highest levels, there are far more women in all areas of the media; yet  things have still gotten worse.

While I agree that the media bears some responsibiity, my view is that change will not come from the top— but from the bottom.   (I’m not talking Spanx).  And that won’t happen while we continue buying the products—and by extension, the message.

I wish I had better answers;   This is a complex problem involving economics, politics, sociology, psychology and biology—that can ‘t change overnight.  But maybe, just maybe, American women are wising up and will start rising up.

That’s part of the strategy behind the film whose website includes a pledge to sign, promising to help create change.   ( I signed and hope you will too.)

Hopefully Miss Representation will be an important start.  Although  I hesitate to use the word start….the more important question is when and where it will end.