You are here: Home / Health and Cancer / An Angel in your corner

This post is very difficult to write and not what you would expect.  And not what I would expect.  I’m not even sure where to start; so I’ll start with an end—the end of my marriage to the man who is the father of my two children.

People are usually surprised when they learn about the family dynamic between me and my two husbands.  Although “friendly divorces” are more common these days, our situation has been unconventional.

Maybe no divorce is really final when you share children. The truth is that a marriage might be over but feelings can remain—and friendship does, too.

I can’t say we haven’t had our differences and disagreements; but I can say that we’ve always remained a partnership, with our children as the focus.

Howard never remarried;  I’ve been married for 17 years to my second husband.   Howard has been an integral part of our lives from the beginning.  When I remarried and moved with the kids from Los Angeles to a new community 300 miles away, Howard stayed in our new home with the kids while we went on our honeymoon.  At times when we were all in the same place, my current and former husbands became golf buddies.

Less than a year later,  I got cancer.  I would fly to Los Angeles for chemo; Howard would fly up and stay in our house with the kids.

I fully expected that someday he’d be raising them when I was gone.   What I never expected was how the tables could turn—and it would be my turn to support him when he had cancer.

No words exist in the English language for these relationships which are so common today.  How do you describe the relationship between my current husband and my ex-husband?  And what do I call what my ex-husband’s girlfriend is to me?

Howard describes her as an angel that dropped down out of  heaven.  And for him, that’s totally accurate.

They met during one of his periods of remission—a time when not many women would begin  a new relationship with such an uncertain future, especially a woman who had lost her own husband to cancer a few years earlier.

It hasn’t been a long relationship—I was married to him four times longer than she has known him.  Though they had a brief period to enjoy their time together, most of their relationship has centered on his health.

She stuck by him when lymphoma kept coming back, despite multiple courses of chemo, radiation and a stem cell transplant.  Ultimately his doctors gave up and said they had nothing more to  offer.  He didn’t give up; and neither did she.

She’s lived her entire life centered around a healthy lifestyle,  believes strongly in eating organic, taking very little medication—and she influenced Howard to follow her lead.  Surely her greatest contribution was  finding and urging him to seek out a doctor who cured him of lymphoma. “Cure” is not a word I use lightly— but that’s the only way to describe it.   Once Howard started on this new program, his lymphoma disappeared.

Life seemed promising again; until they discovered a short time later  that the chemotherapy and radiation had caused  him to develop Myelodysplastic Syndrome, known as MDS, a precursor to leukemia, that damaged his chromosomes and has led to the precarious life-threatening state he is in now.

Howard has been heroic about all this; and so has she.

There isn’t much research or effective treatment for MDS.  Anyone who has been in a similar situation knows the constant frustration and hopeless feeling of dealing with an illness where there are no answers and a medical system that doesn’t produce results.

It requires someone to be a combination of a pit bull and a saint.

Howard’s girlfriend proved to be both.  With no previous training or expertise,  she dove into research, becoming incredibly informed on the condition, all the scientific studies and experimental treatments; finding  options even his doctors haven’t heard of.  She does so much research, I think she’s on the computer more than she sleeps.  She manages his medications;  by now she knows more about the particulars of his case than his doctors, or Howard himself.  She’s relentless, somehow getting through for consultations with doctors  and experts impossible to reach.  She’s also relentlessly optimistic, refusing to cave in; refusing to allow either of them to feel like victims.  She lives more than an hour away so she can’t be there on a daily basis—but she’s up to date electronically—the phone attaching him to her has become his lifeline.

He would say, and I would agree, that she saved his life and bought him more time.  At this point I would say his life depends on her being in it.

As unconventional as his medical treatment was at times, so was the ongoing unconventional situation we found ourselves in—two women who both care about the same man, sharing  in his ongoing health and welfare.

To be completely accurate; she has done all of the heavy lifting; I’ve played a very minor supporting role.   But it’s still been unusual.  I often wonder what the nurses think when either one of us is likely to show up with him at the infusion center where he goes almost daily now for blood transfusions.

As difficult as it has been while his condition has worsened,  knowing she is there has brought his family a level of comfort we could never adequately express. His spirits and his energy seem to improve when she’s around.

Which leads me to this:

In all the unexpected twists and turns that have been part of a life where I ended up calling my blog I never signed up for this, I don’t think I ever could have imagined a scenario where an ex-wife would be writing a tribute to her ex-husband’s girlfriend.  But  I am; and here it is.

In a sense I’m also writing this to honor other people who are undaunted by all the roadblocks life sends their way; to honor those unsung heroes and caregivers who make a huge difference in so many lives, one by one.

What I would wish for anyone who gets cancer, including me, is to have someone like Howard’s “angel” in their corner.

A few years ago I became a member of the Blogger Advisory Council of the American Cancer Society, which had just adopted its slogan, Creating a world with more birthdays.

I’ve worked with this  organization that does so much for people with cancer;  including a recent partnership with Tiny Prints, which is helping fight cancer with its exclusive collection of birthday cards inspired by the way the American Cancer Society saves lives. 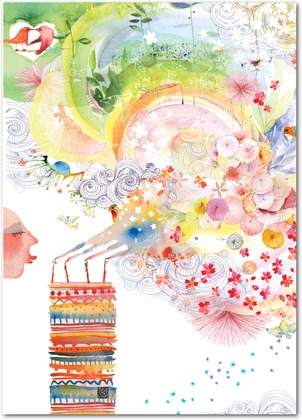 It was the obvious place for me to go to create a card for Howard’s girlfriend, whose birthday is this weekend.  The perfect way to personally express the gratitude I feel for all her contributions.

We remain hopeful that Howard will see another birthday; still, she has already given our children so much—including the opportunity to celebrate more birthdays with their dad than would have been expected a few years ago.

So Happy Birthday to you, Dina—-with deepest admiration, appreciation,  and gratitude for doing so much to help  create a world with more birthdays.

This sponsored post was written in conjunction with the American Cancer Society/Tiny Prints card collection launch.  Click here to see the collection.