You are here: Home / Parenting & Family / The Justin Bieber of TED talks

(This is for every mom who’s bitched about a teenager—in the past, present and future.)

He’s 16 years old, so Jack Andraka’s mom must have something to bitch about.  But  surely she’s not bugging him to boost his chances of getting into a top college by improving his resume. (Check it out)

As a  junior, he’s not ready for college yet; but his resume already includes this little item when he was 15:  winning the Intel Science Search (worth almost $100,000 in prizes) for developing a test to detect early stage pancreatic cancer with a simple dipstick that is far cheaper and more accurate than anything that exists.

So probably no worries about SAT scores.

And he’s already got a pretty sweet teacher recommendation in advance, from the professor at Johns Hopkins Medical School who agreed to supervise Jack’s research in the lab after 199 other professors turned down his proposal.  Here’s what Dr. Anirban Maitra says about Jack:

“Think of Thomas Edison and the light bulb. This kid is the Edison of our times. There are going to be a lot of light bulbs coming from him.” 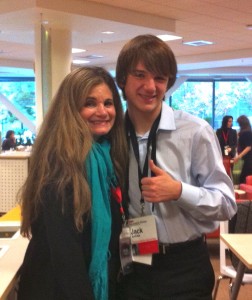 He sat with Michelle Obama in her box listening to the President deliver the State of the Union address.  And he delivers a pretty spectacular speech himself.

Jack is a rock star. 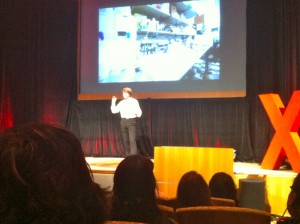 Like Bieber, onstage he’s in total command.  The audience was spellbound.

Well, actually there was screaming  – from Jack himself, in the video showing his reaction on winning the prize.  (If you haven’t seen it, I promise it will make your day)

Offstage, he’s a rock star too.

He has fewer  Facebook fans than the Biebs.  And maybe they tend to skew older.  But they do ask for autographs and pictures. 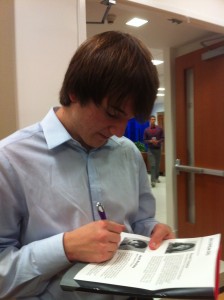 Unlike a typical teen idol,  there’s zero arrogance.  No visible tattoos.  He’s polite.  Humble.  Almost shy.  Like a regular high school kid, which he is.

He told me he’s not a complete nerd; that he likes normal stuff like kayaking.  But he was way more excited describing his current research project.

Jack and a team of other teens are competing against 300 teams of adult scientists and corporations for the $10 million Qualcomm Tricorder XPRIZE  to be awarded in 2015.

He described it as a small device that you will scan over your skin, which can diagnose any disease  and create personalized treatment delivered in 3-D format over your cell phone.

To me it sounded like science fiction.  But Jack says the technology already exists.  And I’m sure he’ll explain it when he’s interviewed on 60 Minutes this Sunday.

Can you imagine being his mom watching that?

Still I have to believe she has something to bitch about.  Maybe his room is a mess.  Or maybe he forgets to text her to let her know he arrived safely at his next TED talk.