You are here: Home / Popular Culture, Celebrities & Social Media / The many lives of Shirley MacLaine 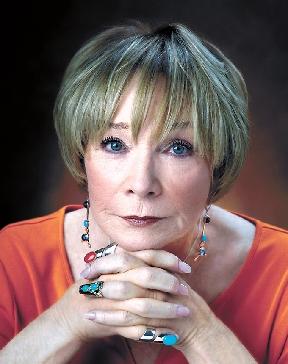 All of those lives were on stage—live—when Shirley MacLaine brought her one woman show to Carmel recently.

She just walks out onstage and plops into an easy chair, introducing her show by saying she wants us to feel as if we’re all just hanging out in the living room.

And that’s how it feels—as she shows a series of photos—-just talking and telling stories about them.

Seeing the pictures —professional and personal—that go back over her entire lifetime (at least this one) you realize what an extraordinary career—and journey she’s had.

Her big break came at 19 and seems right out of a movie or the new show Smash.  She was the understudy on Broadway for the star of Pajama Game;  one day the star broke her ankle; that night Shirley went on; the rest is history.

She tells stories about her parents, her brother Warren, her famous friends from Ellizabeth Taylor to Bob Fosse to Frank Sinatra and her Rat pack days to Fidel Castro.  And her movies—so many of them.  I can’t decide which of her roles is my favorite; though there’s no contest for my favorite scene.  Anyone who’s spent time in hospitals can relate to the scene when she loses her cool while Debra Winger is dying.  From what Shirley said, making Terms of Endearment didn’t endear her to its director Jim Brooks, although she won an Oscar for it.

After the presentation she offers to answer questions from the audience—-which she did with grace and good humor for almost 90 minutes—ranging  from questions about her early life to her love life to the after-life .  She even brings out a special guest to share the stage—who she describes as the  real love of her life—her dog.

These days she’s cut back on traveling the world to travel more “internally”—while living a quieter life in Santa Fe.   Doing her show, writing a new book, appearing on Downton Abbey and in Bernie, a new movie starring Jack Black —that’s her version of a quieter life.

All I can say is that I admire and aspire to have her energy and enthusiasm for life when I grow old.

Unscripted, uncensored, unencumbered—no matter what you think about her spiritual quests or her politics,  she exudes intelligence and curiosity; she really is someone you’d want to hang out with in the living room.