You are here: Home / Chocolate & Other Food for Thought / Code Brown: the Global Chocolate Crunch 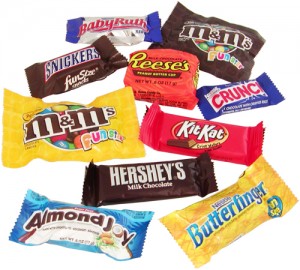 The nations of the world haven’t managed to reach agreement on how to confront global warming.  But now faced with an even great threat, no one is Snickering.  My mind reeled as I tried to Crunch the numbers: there it was —in black and white—and brown.

The world could run out of affordable chocolate within 20 years as farmers abandon their crops in the global cocoa basket of West Africa, industry experts claim. The shortages in Africa will have a devastating effect: “In 20 years chocolate will become so rare and so expensive that the average Joe just won’t be able to afford it.”

The reaction on Wall Street was predictable; investors consuming chocolate stocks like kids gorging on Halloween, expecting a big PayDay.

Godiva and other high end chocolatiers are adding caviar and truffles to their products in an effort to bring down prices—while the news is a blockbuster for UPS, which has agreed to worldwide use of its slogan, already showing up on bumper stickers: What can brown do for you?

The United Nations announced the immediate suspension of Angelina Jolie;  her starring role will be assumed by Johnny Depp, beloved to children of the world as Willy Wonka.   Even Switzerland has joined the war effort, dropping its historical tradition of neutrality.

NASA has reportedly launched  top secret Mission Milky Way ; sources predict a manned spaceflight to plant cocoa on Mars; while the Cousteau Society will try to grow it at the bottom of the ocean, making  it easier to sprinkle with sea salt.

Experts say it’s premature to add Baby Ruth to the endangered species list; but Milk Duds and Junior Mints are already in danger of becoming extinct.  To help replenish this irreplaceable resource, The National Resources Defense Council has announced plans to clear out forests of redwoods and sequoias, replacing them with cocoa trees to preserve the supply for future generations.

Thanks to the generosity of Melinda and Bill Gates, billions are available to scientists working to create a synthetic version of Tootsie Rolls. Says Gates, “Who knows what was in them,  anyway?”

As usual celebrities are signing on as Rolo models: Ashton Kutcher changed his twitter name from @AplusK to @MrGoodbar, while his wife Demi Moore posed for the next Vanity Fair —covered only by chocolate kisses in strategic places.  For the next season of Project Runway, Heidi Klum has put out a casting call for Chunky models.

Oprah, fighting tabloid rumors that she is stockpiling chocolate in heavily guarded warehouses, promises on her final farewell show to give each member of her audience 100Grand.

Sarah Palin is urging all Alaskans to skip Moose season and hunt for Eskimo pies.

And to capitalize on the trend and its trademark KK names—the entire Kardashian family will hyphenate, and be officially known as the KitKat-Kardashians.

As Americans are being asked to tighten their belts, the National Guard has responded to reports of rioting in Hershey, Pennsylvania by deploying 3 Musketeers.

In news from the nation’s capital, the Chocolate Consumer Conservation Act ( known as the Butterfinger Bill after heavy lobbying by former President Clinton) is expected to pass with broad bi-partisan support.  Also on the political front, California will be voting on a proposition to legalize marijuana and prohibit brownies.

Secretary of State Clinton has modified the crisis warning system and raised the security alert to brown: warning Americans that the chocolate shortage may be a tactic of the Taliban, since Osama bin Laden is known to be addicted to Reese’s Peanut butter cups.

With the world’ s attention turned brown instead of green, some are already wondering what happens if the chocolate crisis is averted— while global warming continues.  Says Cadbury spokesman Mr. O. Henry, “What’s the worst case scenario?  If the ice caps melt,  at least we’ll have plenty of hot fudge sauce.”